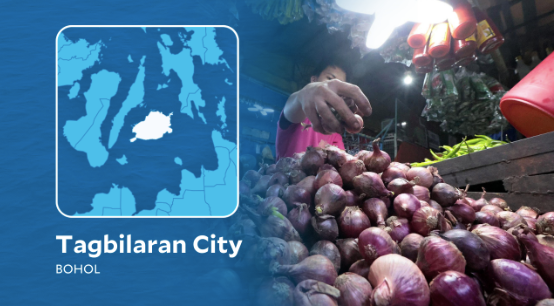 The high price forced her and some vendors to stop selling red onions for two weeks.

“It’s really expensive. Some were surprised by the exorbitant price,” said the 46-year-old vendor.

She said a sack of onion is sold at P12,500 from a retailer who ordered it from outside the province.

And she didn’t want to gamble.

“Some are rotten. I don’t want to sell red onions just for a show. It’s a loss,” said Maldora.

Majority of public markets in Tagbilaran City are still selling red onions for P380 to P500 per kilogram.

As of Dec. 28, the price of red onion at the Dao Public Market increased to as much as P550 per kilo while stalls near Shoppers’ Mart sell poor quality red onions for P380.

Still, some consumers bought them in small quantities and were happy to add this staple to their meals even if their quality is poor.

“They looked like the bulb had been peeled several times. They looked very small but I need this,” said Silvestra Sarabia, who only bought three pieces.

“They rot quickly. Not a good idea to buy many pieces,” she said.