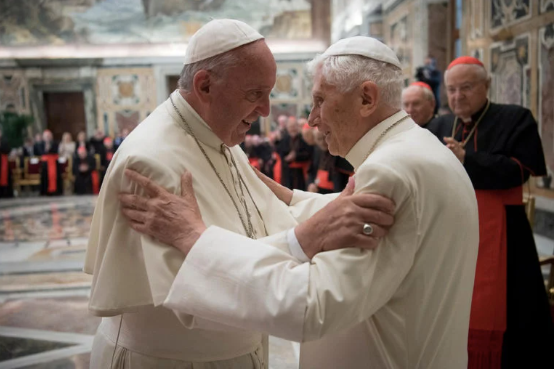 FILE PHOTO: Former pope Benedict (R) is greeted by Pope Francis during a ceremony to mark his 65th anniversary of ordination to the priesthood at the Vatican June 28, 2016. Osservatore Romano/Handout via Reuters

VATICAN CITY — For the first time in modern history, a sitting pope will preside over his predecessor’s funeral next week, with Pope Francis leading a “simple” ceremony for Benedict XVI, who died Saturday.

Benedict, the first pontiff to resign since the Middle Ages, had renounced the papal throne — but lived within the Vatican and still wore white.

The 95-year-old would have a “solemn but simple” funeral on Thursday, Vatican spokesman Matteo Bruni told journalists at a briefing following his death.

The sudden deterioration of the ex-pope’s health earlier this week had sparked questions over what would happen next.

The death of a Roman Catholic pope usually sets in motion time-honored traditions, but would someone who had given up the papacy get papal treatment?

Unlike when previous popes have died, there is no need to call a conclave to elect a new pontiff, as Francis — chosen to succeed Benedict in 2013 — remains very much in the post.

Under rules set out in 1996, a pope must be buried between four and six days after his death.

How and when he is buried is usually decided by cardinals who gather from around the world, and who also organize the Vatican’s nine days of mourning, known as novemdiales.

They decide because the death of a pope traditionally creates a power vacuum at the top of the church.

However, no such vacuum exists in this case, as Francis is in charge.

The ex-pope’s funeral will take place in St Peter’s Square, the vast square in front of the basilica, on Thursday at 9:30am (0830 GMT).

“As the Pope Emeritus wished, the funeral will be simple,” Bruni told journalists.

Francis had alerted the world to Benedict’s frailness on Wednesday, when he called on the world’s Catholics to pray for him.

He later visited him at the Mater Ecclesiae monastery inside the Vatican gardens which became Benedict’s home when he retired.

Bruni said the ex-pope had that same day received “the anointment of the sick”, or “last rites” as it is often called, a Catholic tradition in which a person’s soul is cleansed of sins in preparation for the afterlife.

That was performed at the end of a mass at his home, in the presence of the Memores Domini, four lay women similar to nuns, who lived with him.

The body of the German pope, whose birth name was Joseph Ratzinger, will stay at the monastery until early on Monday morning.

Then it will be taken to lie in state at St Peter’s Basilica, where the faithful can pay their respects over three days.

In 2005 the body of John Paul II, the last pope to die, also lay in state before a funeral mass in St Peter’s Square presided over by Ratzinger, then a senior cardinal.

An estimated one million people attended, alongside heads of state from around the world.

The Vatican said official delegations from Italy and the ex-pope’s native Germany would attend the funeral.

Afterwards, “the coffin of the Supreme Pontiff Emeritus will be taken to St Peter’s Basilica, and then into the Vatican Grottoes for burial”, the Vatican said.

In 2020, media reports said Benedict had chosen to be buried in the former tomb of John Paul II, in the crypt of St Peter’s.

The body of the beloved Polish pope was moved to the upper part of the basilica when he was beatified in 2011. He was confirmed a saint in 2014.

Traditionally, when a pope dies, his “Fisherman’s Ring” — a signet ring specially cast for each new pope which once was used to seal documents — is also destroyed.

When Benedict left office, the face of his ring was etched with a “X” to make it unusable.

Two popes in the Vatican – sometimes more crowd than company