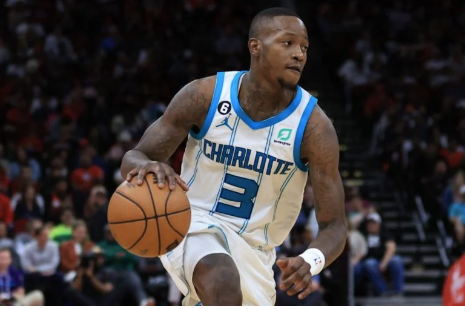 FILE – Terry Rozier #3 of the Charlotte Hornets in action against the Houston Rockets during the second half at Toyota Center on January 18, 2023 in Houston, Texas. Carmen Mandato/Getty Images/AFP

Atlanta’s Clint Capela made two clutch free throws and tipped in the go-ahead basket with 5.4 seconds left to put the Hawks ahead, 118-117. Rozier was then fouled on a 3-point shot by Jalen Johnson and made all three foul shots.

After calling two timeouts, Atlanta’s Trae Young was unable to inbound the ball and get off a final shot. Young exchanged words with coach Nate McMillan after the violation when Charlotte called timeout.

Rozier scored 28 points in the second half and was 7-for-13 on 3-point attempts overall to help Charlotte, which played without leading scorer LaMelo Ball, out with a sprained ankle.

Terry Rozier went off in the @Hornets' comeback win 🔥 pic.twitter.com/YdnsL5x78B

Mason Plumlee had 25 points and 11 rebounds while P.J. Washington scored 23, including a pair of clutch 3-pointers in the final three minutes.

Charlotte has won two of three from the Hawks this season. The final regular-season meeting will be Feb. 13 in Charlotte.

Atlanta shot 61 percent in the first half and built a 65-49 lead thanks to a four-point burst at the end of the quarter. Young was fouled on a 3-point attempt with 0.4 seconds remaining and Charlotte coach Steve Clifford was hit with a technical foul after the call was verified upon video review. Young made all four free throws to expand the Hawks’ lead to 16 points.

Atlanta led by 70-51 when Rozier got hot, scoring 17 and hitting five 3-pointers in the third quarter, and cut the lead to 87-85. The Hawks closed with a 3-pointer from Aaron Holiday and a three-point play by Young and took a 93-85 lead into the fourth quarter.

The Hornets continue their four-game road trip on Monday at Utah. The Hawks play again Monday at Chicago.

Your subscription could not be saved. Please try again.
Your subscription has been successful.
Read Next
Danao Technologian shares journey to being champion of National Computer Engineering Challenge