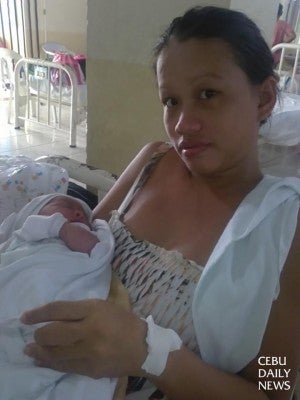 Orjean Panaganan, 28, happily holds Thalia Maria Panonce, weighing 3.65 pounds, who was born two minutes past midnight of the first day of the year of the Wooden Sheep at the VSMMC. (CDN PHOTO/ MELISSA CABAHUG)

Her mother, Orjean Panaganan, 28, said Thalia was smiling instead of bawling  when she emerged at two minutes past midnight.

Thalia was the first of 31 New Year babies born at the VSMMC.

It was only after a nurse tickled Thalia that the baby started to cry.

Thalia is Panaganan’s third child. The mother said this pregnancy was a lot easier than her first two,  although the New Year baby forced her to go to three  medical facilities first.

The mother was first taken to the Perrelos health center in the morning when  she felt labor pains, then was  transferred to the Carcar district hospital when the baby didn’t come out.

As a precautionary measure,she was brought to  VSMMC in Cebu CIty for delivery.

She said she liked the name Thalia, and didn’t single out the name of the Mexican soap opera actress.

“Wala ra, mao ra may akong nahuna-hunaan after niya nigawas (I just thought of it),” she said.

Panaganan’s other daughters from a previous relationship are aged 7 and 5.

She said she was glad that Thalia’s father, Renfredo Panonce, a construction worker and her neighbor, has  accepted the older girls  as his own.

She stays at home with the kids but even with their meager income, she said she is happy to have a a kind partner and a complete family.

She said she could only wish that Thalia and her siblings would be able to finish their studies and grow up to be good people.

Read Next
Firecracker kills baby in Neg Or