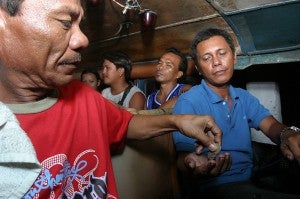 Emerald Joy Mejares, a 21-year-old employee of the accounting department of a government office, expressed some relief over news of a P7 fare rate for jeepneys in Central Visayas which takes effect today.

“It’s been a while that there is a decrease of oil prices so there must be jeepney fare reduction too. Let’s see if these jeepney drivers would follow the new order of the provisional fare reduction,” she laughed.

Like Mejares, college student Charlene Ballena, said she’s very happy with the decision of the Land Transportation Franchising Regulatory Board (LTFRB) to cut the jeepney fare by 50 centavos.

“Especially with the discount given then it will be a big savings for our allowances,” Ballena said.

Provisional
“We will also issue certifications to the drivers on January 13 (today) for them to know the approval of the provisional fare reduction,” he said.

Ginez said the continuing decline in global oil prices was their basis in approving the provisional fare reduction.

The order was issued last January 9 and signed by Ginez and LTFRB board members Ronaldo Corpuz and Antonio Enrile Inton.

But 90 centavos will still be charged for every succeeding kilometer because it wasn’t covered by Pe’s petition.

Ginez said  the P7 jeepney fare is provisional because the LTFRB will continue to conduct hearings for the final resolution of the petition.

“There is also a possibility that the final resolution is lower than the amount of the filed petition but it still depends on the situation,” he told the reporters.  Students, persons with disabilities and senior citizens can still enjoy the 20 percent discount of the fare.

Ginez warned that drivers who overcharge will face sanctions based on Joint Administrative Order (JAO) 2014-01.

The LTFRB-7 will conduct a hearing on flagdown taxi rates on January 16 in response to a petition filed by Negros Oriental Rep. Manuel Iway.

Iway called for a reduction of the taxi flagdown rate from P40 to P30 for the minimum rate.

He also lobbied for a P2.50 rate from the current P3.50 for every waiting time of two minutes and every succeeding 300 meters.