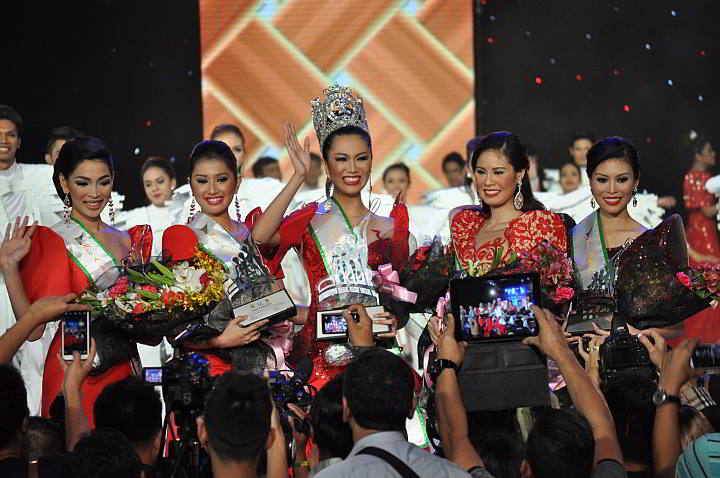 Wynonah Van Joy Buot, a  state scholar who  graduated from the University of the Philippines, was  crowned Miss Cebu, besting 11 other aspirants.

Buot last night  swept all four special awards: Best in Evening Gown, Kapamilya Star for the Night, Miss Photogenic and Miss Friendship.
Joining her court are Ma. Genefe Navilo (1st runnerup), Aivy Mae Castro (2nd runnerup), Lucena Rose Magdadaro (3rd runnerup), and Domenic Reynes (4th runnerup).
Buot, 21, graduated from UP Cebu with a degree in Mass Communications.  She gets to take home P60,000 cash and will travel to  Las Vegas, Nevada in the US, Korea and Hong Kong.
“I will  wake up the next day and have to remind myself that I won Miss Cebu 2015,” said Buot after the pageant, still feeling heady with the victory.
She said she would have to  prepare for the responsibilities that come with it.
The pageant was held at the  grand ballroom of the Waterfront Hotel and Casino in Lahug.
The pageant, the oldest running beauty contest in Cebu,  is held every Sinulog, and aims to present  self-assured, intelligent, poised  young women as role models for the modern Cebuana.
There is no contest segment featuring the women in swim wear.
During the elimination round, Buot picked a question prepared by candidate Roselyn Clavano.
“If you were a flower,” she was asked, “what flower would  you be and why?”
Buot said she  wanted to be a rose because “there is beauty in imperfection.”
She said that inspite of  her imperfection, she  wanted to become a catalyst for change.
Five  finalists were each  asked: “If you were to take Pope Francis to dinner in Cebu, who would  be your Cebuano guests and why?”
Buot said she wanted to invite Cebu students because students “are the hope of the future, the hope of the country.”
“In the dinner, we can talk about how we can strengthen and unify…  bring  (about) change in society.”
Reyes, Navilon and Magdadaro answered that they wanted to take street children with them to dinner.
Crowd favorite
The 12 candidates led by Miss Cebu 2014  Dianne Muego opened the pageant with a dance.
They also  modeled  “modern Maria Clara” outfits  by  Cebuano designers as they were serenaded by the Voice of the Philippines contestant, Jem Cubil.
In the evening gown competition, they wore   red ternos created by designers Albert Ariba, Marichu Tan, Jun Escario, Ditas Rodriguez, Wendell Quisido, Philipp Tampus, OJ Hofer, William Manahan, Dino Lloren, Arcy Gayatin, Ren Manabat and Harley Ruedas.
Designer Marichu Tan was named best designer of the pageant for her gown which was worn by Febb Flores.
This year’s judges included model and entrepreneur Suyen Chi Sia, 1986 Binibining Pilipinas Maja Ma. Luisa Agana, artist John Charles Celdran and fashion designer Frederick Peralta. Michael Carandang chaired the board of judges. /With Chief of Reporters Doris C. Bongcac
Read Next
Rama’s budget veto stays