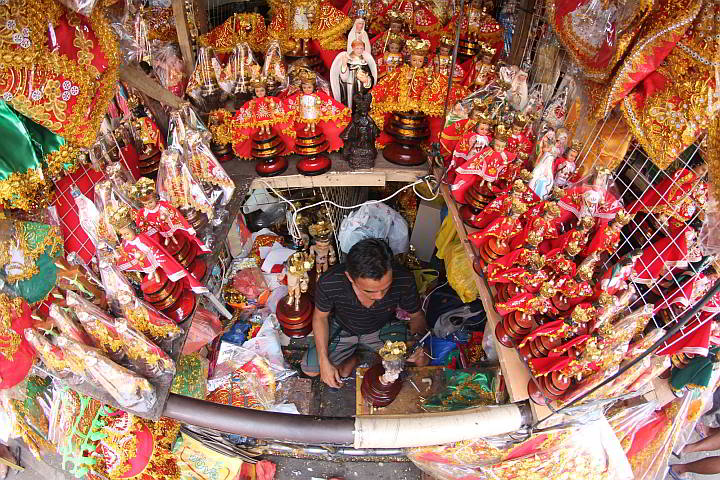 Aside from the food and accommodations sectors, the local retail sector benefits from the Sinulog crowd like this stall selling Sto. Niño images in Cebu City, which experiences brisk sales. (CDN PHOTO/CRISANTO ETORMA)

Sinulog has always been a crowd drawer for Cebu fueling a lot of economic activities that benefits certain sectors like tourism and retail.

As early as Monday last week or less than a week before yesterday’s Sinulog Grand Mardi Gras, different accommodation establishments were already full and restaurants especially those inside malls started to notice an increase in the number of diners.

Based on data from Department of Tourism (DOT), there are 9,681 hotel rooms available in Cebu offered by accredited accommodation establishments.

Tourism Regional Director Rowena Montecillo said most of these rooms get occupied during the  Sinulog which is a peak season for Cebu’s tourism.

Last year, there were 237,701 travelers that came to Cebu in January, a 1.34 percent growth from the previous year.

She said they expect this year’s festival to still draw many tourists to Cebu.

Steven Kokseng, marketing manager of Harbour City Group, which owns and operates Dimsum Break, Harbour City, Ding Qua Qua, said Sinulog week is a good week for them and the rest of the food retailers.

“We usually see an influx of Sinulog-related traffic —  be it at the malls or in branches near where Sinulog activities are held. We also see a lot of out-of-town visitors during the week, mostly domestic tourists,” he said.

“Sinulog is a very busy time for the restaurants. Cebu is very lucky that we have an extended Christmas due to the influx of people coming for the feast. Profile of customers include local tourists, balikbayans and foreign tourists,” he said.

Juno Viado, marketing head of the Laguna Group of Companies, said they never fail to see more diners during Sinulog.

“Yes, there are definitely more diners during Sinulog since balikbayans, local and foreign tourists are in Cebu to experience Sinulog and food is part of that experience,” he said.

The Laguna Group of Companies include Cafe Laguna and Lemon Grass.

Read Next
Of tolerance and respect