Netizens speak up in summit 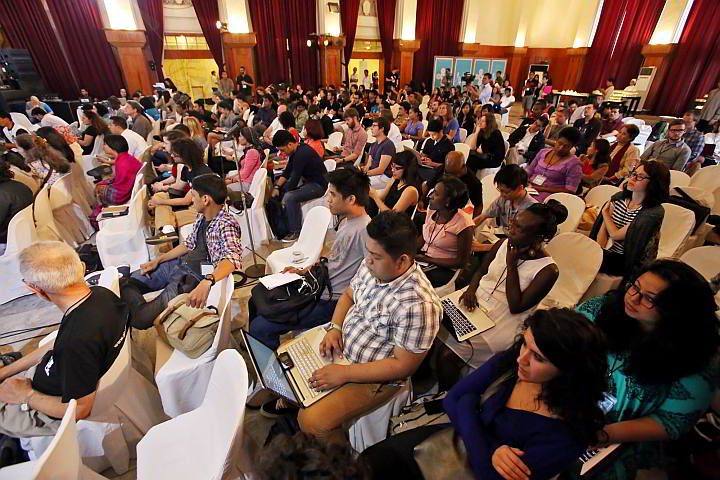 POUND FOR POUND. Some of the foreign and local participants pound on their laptop keyboards while some are all ears on the issues discussed at yesterday’s Citizens Media Summit held in the Cebu Provincial Capitol Social Hall.
(CDN PHOTO/JUNJIE MENDOZA)

Right to privacy, Internet accessibility, digital surveillance and freedom of expression were among the issues discussed at length in yesterday’s opening of the Global Voices Citizen Media Summit at the Cebu Provincial Capitol.

The summit, attended by 300 delegates from 60 countries, is the sixth edition held by Global Voices, an international citizen’s media network founded in Harvard University in 2004.

“This event is especially significant in Cebu because Cebu is an important venue for Internet activism. It was on March 29, 1994 when the Philippines was first connected to the Internet and Cebu was the first to be connected,” said Al Alegre, executive director of the Foundation for Media Alternatives.

The event kicked off with a statement of solidarity by Global Voices members who called for the release of bloggers who were jailed in various countries for speaking out against government abuses.

Nani Jensen, director of the London-based Media Legal Defense Initiative, said among the challenges facing the open Internet are Internet-specific legislation which is open to abuse and restrictions by governments, restriction of political content and extending libel laws to online content.

“In Zambia, the online newspaper Zambian Watchdog was blocked by the government (for being critical). In Pakistan, citizens there cannot access Google and YouTube which is blocked for two years now,” she said.

Cat-and-mouse
Jansen said the fear of legal proceedings has discouraged people from speaking out more “which is a shame (because) you can always fight back.”

Chirannuch Premchaipom, co-founder of the citizen website Prachatai, said freedom of expression and access to the Internet had been restricted in her native Thailand due to martial law following a recent coup d’état.

“In Thailand, we play a cat-and-mouse game and these aren’t large mice, but little mice who land in jail,” she said. Premchaipom said while tourism in the country is back to normal, freedom of expression and online access remains restricted.

Despite these conditions, Premchaipom said young Thai students are just as familiar with social media as their counterparts in Asia. “They’re asking what is new media because for them, they’ve grown up with it through their smart phones and mobile devices.”

She called on delegates who live “in free countries to stand up for Internet freedom” in countries like Thailand.

“The Internet is across the board, no one owns it. Government is trying to regulate it. People in power are the problem and (their constituents are) the solution. People power can solve that problem. Government must listen to the people and the people should make their voices louder (to be heard),” she said.

Lokman Tsui, assistant professor of the School of Journalism and Communication of the Chinese University of Hong Kong, said the Chinese government has a “love-hate” relationship with traditional and social media.

He said while the government restricts access to Western news websites, it has allowed the growth of homegrown websites that provide information “and serve as steam valves” to allow the Chinese to ventilate their sentiments on issues.

Digital footprint
Meanwhile, Alegre said while mobile devices and access to the Internet has become cheap, available and easy to learn, they are also vulnerable to digital surveillance by the government.

“Everyone leaves a digital footprint. The case of ex-Central Intelligence Agency (CIA) systems administrator Edward Snowden showed how governments around the world like the US have technologies that can bypass security on websites like Skype…state and corporate surveillance are now acknowledged  in the highest levels of global governance,” he said.

Saying that surveillance had been justified by governments as a tool in the war against terrorism, Alegre said laws on Internet use and access should be enacted with respect to a person’s rights to privacy.

“We cannot be selective of human rights. Rights to freedom of expression and privacy are linked and indivisible,” Alegre said.