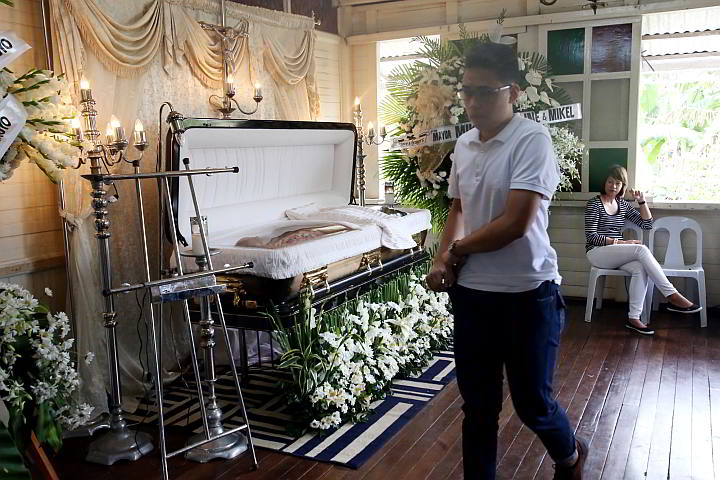 “The best lesson I learned from my father was to cherish your family first. That’s what he would always tell me: that I shouldn’t leave my mom alone especially when he’s not around,”  Paul told reporters at the vigil wake.

The wake is being held in the Rama ancestral house built in the 1940s, a spacious, wooden residence of the late Sen. Vicente Rama and Cebu Gov. Osmundo Rama in barangay Basak San Nicolas.

The house has  sentimental value  for the clan as  the gathering place of  Rama menfolk on Sunday mornings where they would discuss politics and current events over breakfast.

“Ang wit ni George, walay makapuli. Ang courage sa pagstorya, way makapuli. (No one could match his wit or courageous  speech.) George was one of a kind, too difficult to replace.”

Mayor Rama said their clan lost a “defender and protector”, while he lost a loyal ally.

“He always respected my decision. I have lost a friend, a confidant, a protector and a defender. I learned so much from him.”

Among the first flower stands to arrive yesterday expressing condolences was that of  Rep. Gloria Macapagal Arroyo with husband Miguel.

Lying in state, George was dressed in his favorite orange floral polo shirt. His burial at the Cebu Memorial Park is set next Monday.

The 66-year-old village chief succumbed to bronchopneumonia past 2 p.m. on Monday after being confined in Chong Hua Hospital since Jan. 15.

With George’s death, the number one councilman of the barangay, Norman Navarro will take his place as barangay captain.  Navarro is also one of the choreographers of the successful  Lumad Basakanon dance troupe, which Rama  founded  in 1990 by tapping out-of-school youths.

Despite his busy schedule, George would make it a point to have breakfast and dinner at home with his wife, Geraldine and son, said Paul.

Paul recalled their  last conversation on Tuesday last week in the hospital where he dropped by on his way to school. He said his father told him to take care of himself.  After that, the official was too weak to speak.

Paul said he would miss his father’s deep, gravelly voice.

“He had a big voice. Although we sometimes got intimidated by him, he was a soft-hearted person. He would get  angry for the right reasons. When he got  mad, you would learn  a lesson,” Paul told reporters.