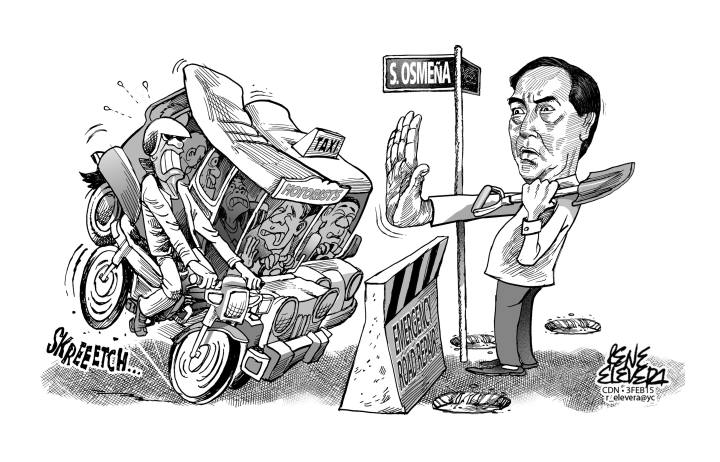 When Cebu City Mayor Michael Rama described the city’s traffic situation as a “crisis” and his handling of it as “crisis mode”, he showed what he meant with unannounced, strangely timed road blocks on Sergio Osmeña Road last Saturday afternoon.

The decision to seal off parts of  S. Osmeña road and redirect traffic was made in a meeting with Mayor Rama and Citom board members at the mayor’s family compound on Saturday morning.

It was implemented by 3 pm.

Without any forewarning to the public, Citom enforcers went on field to set up steel barriers and direct motorists.

The initial confusion was expected.

The cries and curses of drivers and commuters went up loud.  It was a payday weekend, where all roads lead to SM City in the North Reclamation Area and other sale opportunities in Ayala Center further uptown.

Delivery trucks were circling and backing out in confusion. Cars stalled on the road, looking for alternative routes. By evening, some adjustments were made to give more access, and get the flow going again.

Is “golpe de gulat” the theme now of what Citom calls a season of “experimentation”?

Are we left to wonder when is the next day the mayor will wake up and decide to order detours for breakfast? The way Banilad-Talamban road users woke up last year to discover there was no left-turn allowed on that congested highway?

Saturday was also the day we learned that Victor Caindec has left his new post as executive director of Citom. He lasted barely six weeks.

While Caindec said his departure isn’t related to Saturday’s unannounced road action, it does reflect the kind of  policy-making-by-the-seat-of-your-pants Citom and traffic management in Cebu City has become of  late. At least he won’t be blamed for this recent one.

City Hall has to take seriously the importance of timely messages to the public about drastic changes that will upset thier day.

What is City Hall’s multi-media playbook for?

There’s text messaging, Facebook, a website, radio and TV air time, and print space to connect to the public it serves.

Mayor Rama may be overconfident that constituents, whether they drive a motor vehicle or  just have appointments  to keep on the go,  will take traffic “reforms” well if they are dished out like bursts of insight of  a mad inventor.

The potholes and craters in the city’s dilapidated roads are enough of a surprise on a road trip.

If officials want people to get behind change and sustain it, they have to keep people informed – at the right time.

Read Next
Much ado about city trash, SAF massacre