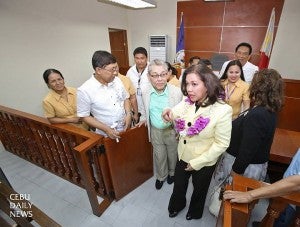 Chief Justice Ma. Lourdes Sereno (second from right) talks to Cebu City RTC Executive Judge Soliver Peras (second from left) and Rafael B. Yrastorza, Sr. during her inspection of the newly inaugurated Cebu Hall of Justice in Qimonda building in the Pier area.

In the not too distant future, Cebu City’s courthouse will be “modern, high-tech and comfortable.”

That’s the vision of Chief Justice Ma. Lourdes Sereno  were it not for budget constraints that kept the Supreme Court from fulfilling this dream.

Sereno yesterday appealed to lawmakers to allocate sufficient funds for the construction of a new Hall of Justice in Cebu City.

Sereno and other officials of the judiciary were here yesterday for the inauguration of Cebu City’s temporary Hall of Justice located at Qimonda IT Center in the North Reclamation Area.

Fr. Joseph De Aquino blessed  the courtrooms in the second and third floors of the rented commercial building.

Municipal Trial Court in Cities, and other judges in Cebu City.

All 30 Cebu City trial courts had to move out of the Marcelo H. Fernan Palace of Justice that was damaged beyond repair following the 7.2 magnitude earthquake in Oct. 15, 2013.

The estimated cost for the construction of a new Palace of Justice was pegged at P1 billion.

In the meantime,  judges and court employees in Cebu City have to hold office at  the Qimonda  I.T. Center where the High Court is paying a monthly rental of P1.2 million under a two-year contract with Qimonda Holdings. 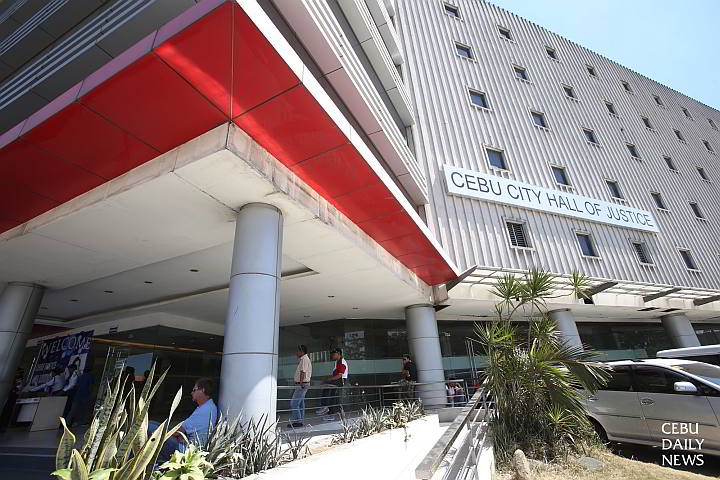 The contract can be renewed after two years.

Sereno said she has been communicating with Cebu Gov. Hilario Davide III on whether  the judiciary can still use the old Palace of Justice in the Capitol compound.

“The question is if we give that up, will the government give us enough resources to build a more permanent building? We hope the national government will help us,” she said.

Sereno said the High Court is also implementing ways to unclog court dockets and in the ultimately decongest the jails.

“If one has a problem, you want to solve it right away. It’s also like that in resolving cases. That’s what we are trying to deliver to the people. It’s no longer justice delayed. That’s a thing in the past. Now, it’s going to be justice real time,” she said.

But in enhancing court procedures and processes, Sereno said one has to be patient.

“It has to go step by step. You Cebuanos know very well what this is all about. I hope you will be convinced that this is the way to go,” she said.

After the inauguration, Sereno and trial court judges went to Marco Polo Plaza  to discuss “Hustisyeah”, another program of the High Court to unclog court dockets.

‘Hustisyeah’ was pilot tested in 33 courts in Quezon City and is now being implemented in some courts in the cities of Manila, Makati, Pasig, Angeles, and Davao.

Court Administrator Jose Midas Marquez yesterday explained that courts with over 500 pending cases will be the target of Hustisyeah.

Aside from Cebu City, courts in Argao and Bogo City will also be under the new program of the High Court.

“We are also after decloging court dockets. That’s the purpose of Hustisyeah,” Marquez said.

In Hustisyeah, the Office of the Court of Administrator (OCA) will bring a special team that will be assisted by law students and some lawyers.

Marquez said the team will conduct an inventory of all the cases in the courts while the teams led by a judicial supervisor from OCA will come up with a decongestion plan with the judge.

The plan will be submitted to the Court Administrator’s Office for approval, Marquez said.

In Cebu City, the High Court has partnered with the University of San Carlos’ College of Law in implementing Hustisyeah.