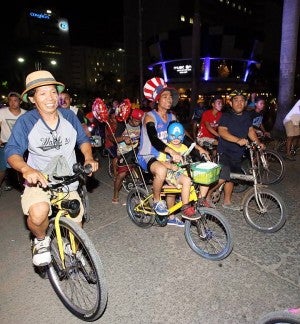 A father and son in costume share a bike as they join around 5,000 cyclists in Saturday’s Earth Hour Night Ride around Cebu City. (CDN PHOTO/JUNJIE MENDOZA)

A day after he said bike runs in main city roads will be “put on hold,” Cebu City  Mayor Michael Rama approved a bike run  organized by a political ally, Councilor Gerry Carillo of the Sugbo Bikers.

After meeting with  organizers of the Penitential Bike Ride slated on Holy  Thursday and Good Friday, Mayor Rama  allowed the event.

He said the organizers agreed to safety conditions that he set after getting upset over last Saturday’s Earth Hour night ride where he noted the large number of riders “like ants”, with many of them going out of their designated lane and not wear safety gears.

In response to Mayor Rama’s criticism of the Saturday event,  Joel Lee, organizer of the  Tindak Sugbo Bike Coalition said they “excitedly look forward to the time, when the designated Shared Bike Lanes can provide them additional safety on the road.”

He was referring to the Tindak Sugbo bike lane ordinance approved by the Cebu City Council last October.  The mayor has yet to convene a bike board to assign 1.5-meter priority shared lanes in Cebu City that can be used by bicycle riders.

“We had a meeting with the bikers and they  committed (to follow rules), “ Rama told reporters.

“I need to document all this. They will comply with it kay klaro man tong tarong ug mga nawng. Naay media, igsuon ni Joel Garganera ug akong kandidato for congressman (They looked serious about it.  There were media, the brother of Joel Garganera and my candidate for congressman),” Rama said.

Carillo, founder of the Sugbo Bikers, said they have agreed on safety measures  for tomorrow’s 30-kilometer bike ride to  different churches in the city.

“The mayor has given us the go signal as long as we take care. We will be having at least 20 marshals, and  a sweeper dumptruck to take care of bikers experiencing problems like a flat tire. The disaster office, together with Citom will also be monitoring the activity,” Carillo said in a separate interview.

He assured that participants will wear helmets and use safety gear  like blinkers otherwise they won’t be allowed to join.

As one of the organizers, Carillo said he won’t ride a bike but will ride the lead car to ensure  the event goes smoothly.

The Sugbo Bikers is spearheading the activity  with the Cebu Photojournalists Organization and  Tindak Sugbo headed by Jay Garganera, brother of Tinago barangay captain Garganera.

At least 200 are expected to join.  Free registration is open  tomorrow from 4 a.m. to 4:45 am at the Plaza Sugbo grounds fronting City Hall.

Unlike what happened during the Earth Hour ride which was participated by around 5,000 cyclists, Carillo said only those who  register will be able to participate in the penitential ride. Their group, the Sugbo Bikers, will have their own uniform.

Free jerseys will be given to the first 100 registrants tomorrow. Others can buy them.

“This ride is a more solemn activity. It’s our “penitensya” (penitence) because the entire bike route is 30 kilometers. At every church we stop by, we will  pray,” Carillo said.

The tenth stopover will be  at San Nicolas de Tolentino then to Sto. Rosario Church , Redemptorist Church then to the Sacred Heart Church and St. Pedro Calungsod then to the Immaculate Concepcion Cathedral and back to City Hall.

In a press statement , Lee said “it is time to have bike lanes” and acknowledged the mayor’s concern for the safety of bikers.

“The community of bikers is certainly grateful to Major Rama for his deep concern for their safety. There is really a big number of bikers now in Cebu City and the neighborhood of cities that addressing their need for safety has become an urgent matter for the local government. ,” Lee said.

But he added that the “approved Cebu City Ordinance No. 2408, known as the Shared Bike Lanes ordinance, is certainly one of the major moves that the city has decided on. Very soon, the Bike Lanes Board will be installed, and the planning for the safe path for bikers can begin.”

The bikers were also delighted to hear from Vice Mayor Labella & Councilor Nida Cabrera announce how Cebu City has become a signatory to the revision of the Kyoto Protocol, which now promotes the “use of the bicycle” as a major feature of sustainable cities to reduce pollution and greenhouse gas emissions.