Retirement resort to rise in Liloan 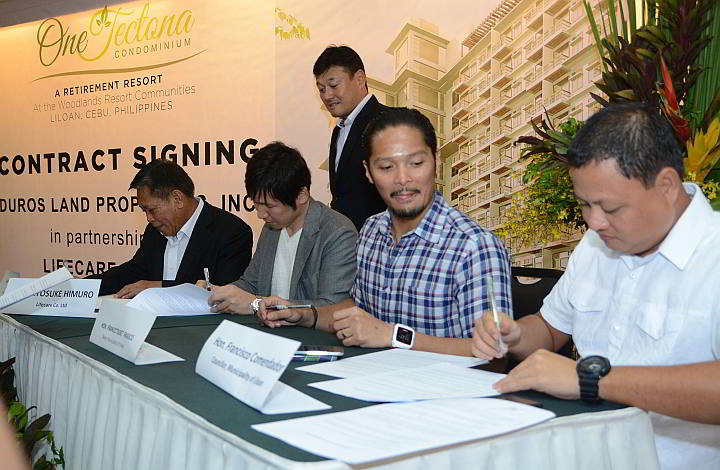 Officials of Duros Land Properties Inc. and Lifecare Co. Ltd. sign the agreement for the development of a retirement resort in northern Cebu. (CDN Photo/Christian Maningo)

Homegrown developer Duros Land Properties, Inc. (DLPI) has partnered with a Japanese company for the development, marketing and management of the first retirement resort in Cebu.

The project, estimated to cost P4 billion, will rise in Liloan in five to 10 years, said DLPI chairman Rafaelito A. Barino. It will be called The Woodlands Resort Communities.

“The whole community will have eight buildings and will offer 1,500 condominium units aside from support facilities like a clinic and an 18-hole golf course,” he said.

Lifecare Co. Ltd., a Japanese company based in Ichinomiya City, Aichi Prefecture, will market and sell the condominium units that will be developed by DLPI to active retirees in Japan.

Lifecare has been operating at least 17 retirement facilities in Japan for the last 13 years.

Lifecare president Kyosuke Himuro said there is a huge interest from an estimated 10 million Japanese retirees to retire in the Philippines.

“Japanese like Filipinos because they are very friendly and they also see the Philippines as a good place to invest in because your economy is going up and the cost of living here is cheaper compared to Japan,” he said.

Hisagana Terada, international marketing director of DLPI, said most of the Japanese retirees don’t have families to take care of them. Hiring a personal caregiver is costlier in Japan compared to hiring one here in the Philippines.

He said, however, that retirees have cited concerns on the country’s Internet service, electricity, water supply and traffic.

“The Internet here is still very slow and traffic is bad, but we think that this will still improve. In terms of peace and order, Japanese retirees feel safer in Cebu than in Manila,” said Himuro.

Aside from the Philippines, Japanese retirees are also keen on retiring in Indonesia, Thailand, Malaysia and Singapore.

Barino said they will launch the first phase of the project called One Tectona by end of May in Japan.

“We will be developing One Tectona,  a 14-story building with 165 condominium units and 21 residential villas,” he said.

One Tectona is targeted to be completed and turned over by December 2017.

DLPI vice president Fe Barino said they have applied for accreditation with the Philippine Retirement Authority.

“Once approved, we will be the first in the country to be accredited. Also we have applied with PEZA (Philippine Economic Zone Authority) as a retirement ecozone park,” she said.