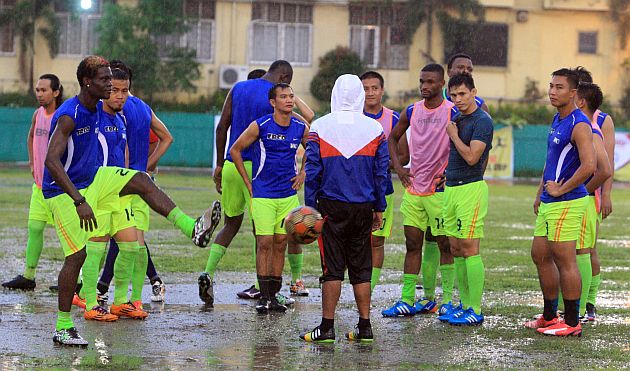 Former Azkals captain Emilio “Chieffy” Caligdong (third from left) and the rest of the ERCO Bro-Green Archer’s United look frustrated after learning that their finals game against Leylam FC was cancelled due to heavy rain.(CDN/TONEE DESPOJO)

Palami is in town together with Azkals coach Thomas Dooley and winger Misagh Bahadoran as special guests for the Aboitiz Football Cup.

Palami, however, didn’t divulge the name of the Azkals’ opponent yet.

The last time the Azkals played in Cebu was in April of last year, where they faced the Malaysia Tigers. The match capped off with a goal less draw.

The first time the CCSC hosted the Azkals was in November of 2012, where they played the Singapore Lions. The Philippines won that match, 1-0.

The Azkals will continue their bid in the FIFA World Cup Qualifiers on Sept. 8 at the Philippine Sports Stadium in Bocaue, Bulacan against Uzbekistan.