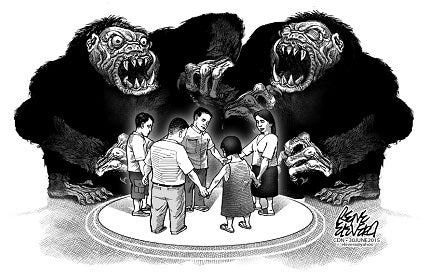 In the June 20 editorial “Stemming the tide of illegal drugs” we noted how police operations resulted in the arrest of drug pushers and confiscated more than P200 million worth of drugs within a span of three months.

The following day, a Sunday, police discovered the naked remains of a 27-year-old woman in a canal near her home in barangay Poblacion, Talisay City. The day after the grisly discovery, they arrested the suspect, her brother-in-law.

Alfonso Saballa admitted killing Manilyn Saballa, the wife of his older brother who works overseas. Saballa said he was fearful of being found out by his mother after Manilyn told him that she would report his drug use to her.

Police are still verifying reports that Saballa molested Manilyn aside from repeatedly stabbing and strangling her with a wire.

With no money to hire the best lawyers in town, Saballa may find himself locked up in jail for the remainder of his natural life but it won’t ease the pain of loss suffered by his brother nor Manilyn’s family.

Saballa may be an open-and-shut case, but sadly he is but one of many whose lives were ruined by drug use. But longtime Cebu residents are all too familiar with high profile personalities who have been paying the price of prolonged drug use.

Despite a promising political career, Cebu Provincial Board (PB) Member Grecilda Sanchez-Zaballero still had to deal with the fallout of her brother Leodegreco Sanchez, who had been in and one out of rehabilitation centers at least 18 times.

The latest word is that Sanchez is due for  released from a rehabilitation center in Argao town in October, whether or not he’s been cured of his addiction.

And despite laying low in jail, not a few have forgotten the dangerous escapades of former Talisay City mayor and now Talisay City Councilor Socrates Fernandez’s son Joavan, whose belligerent behavior had often been blamed on his alleged alcohol and drug use.

People who have been warned repeatedly about and thankfully have avoided every temptation to use drugs may or may not know that a family member, a friend or even a workmate is using drugs and need help.

Unfortunately for Manilyn, her warning to Alfonso only fueled and justified in his addled mind the need to eliminate her. So how can people help drug addicts who may or may not acknowledge the harm caused by their deadly habit?

There are many ways but it usually comes down to strong family ties, church guidance and in case of youths, a supportive campus community. When it comes to indigent families, the barangays should strengthen their existing neighborhood watch as their frontline in the campaign against illegal drugs.

Unless and until community involvement grows, more people like Manilyn will die at the hands of drug users.

Read Next
Rockin’ in the Free World: Neil Young vs Donald Trump