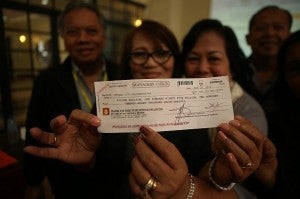 A consortium of two rival property giants, Ayala Land, Inc. and SM Prime Holdings,  Inc.,  was declared the highest bidder for a 26-hectare lot at the South Road Properties in Cebu City.

In a surprise move, both developers joined forces and  submitted the lone bid  of P10.009 billion for  Lot No. 8-B-1, where the Pedro Calungsod templete stands.

This is the first time for SM and Ayala to collaborate on a commercial project in Cebu. The consortium also includes the Ayala-controlled Cebu Holdings, Inc. (CHI).

A check for 10 percent of the bid amount as a  security bond, or about P1 billion, was turned over to the city government.

“Ayala – they have a lot of things to do” as the newcomer in the 300-hectare SRP.

Another SRP lot of  19.2 hectares  up for auction yesterday will likely go to the Gotianun-led Filinvest Land, Inc., which submitted the highest bid of P6.758 billion.

Filinvest edged out Gokongwei’s JG Summit Holdings, Inc., which offered only P4.21 billion for Lots No. 7 and 17.

The two parcels were consolidated into a 192,385 square meter property.

Filinvest handed a check for nearly P700 million as its bid security bond.

Filinvest bid  for the  19-hectare lot located between its 50-hectare development at the SRP and the SM Seaside Complex.

“We’re very happy that we won the bid for the 19 hectares, but I think the big winner here is the City of Cebu because in both properties, you got a much higher price than the minimum bid price. So, I think everybody is a winner here,” Filinvest director Joseph Yap said.

He said the property will complement Filinvest’s 50-hectare City di Mare at the SRP.  Filinvest is developing the 40-hectare portion jointly with the Cebu City government. The company acquired a 10-hectare property, which is being developed into a commercial and leisure strip called Il Corso.

The SM-Ayala consortium is  expected to be granted the right to acquire and develop Lot No. 8-B-1 at the SRP.

The group’s bid amount was nearly double the floor price of P5.267 billion for the  263,383-square-meter property.

The area will be made  “another showcase of integrated, master planned, and sustainable development that will bring in more investments and jobs for the local economy,” the consortium said in a statement.

SM Prime vice president Ronald Tumao  said SM’s master plan includes the construction of a 16,000-seat arena, one of the conditions set for the winning bidder.

He said they plan to put up the facility in time for the 2019 FIBA Basketball World Cup. The Philippines will bid for the chance to host the event together with China.

“We want to bid for FIBA and I think outside Metro Manila, Cebu will probably be the best alternative area for out-of-town games for the FIBA,” Tumao said.

Vice Mayor Edgardo Labella said the SM-Ayala collaboration is a good sign for the city.

“Undoubtedly, this is a manifestation of the great trust and confidence of the business community in the honest and good governance of the present administration,” he said.

The highest bids and supporting documents will be reviewed by the Technical Working Group (TWG) of the Committee on Awards. If everything is in order, the TWG will recommend the issuance of a Notice of Award to the winning bidder.

The two checks for P1.7 billion as security bond will form part of the 50-percent downpayment.

A contract to sell or a memorandum of agreement (MOA) will also have to be approved by the Cebu City Council.

The mayor needs the council’s authorization to sign the contracts.

This is the first time for SM and Ayala Group to collaborate on a project in Cebu.

The two companies have had legal tussles over property development projects in Metro Manila and Bacolod City. Late last year, however, the two developers agreed to settle their conflict over the company managing the Ortigas properties.

“Well, it is really a good thing to have the biggest companies work together for the improvement of whatever we can contribute to the development of Cebu. So, I guess there’s always something positive for a synergy between the two parties and we are very thankful to Ayala for giving us this opportunity to tie up with them,” said Tumao, SM vice president for market research and planning.

“Ayala Group with SM have been talking with each other in many other projects. We have open lines like in the Ortigas development and other developments as well. So, as the two biggest developers in the country, it makes sense to have synergies with each other, considering that we are also both seriously expanding here in Cebu,” he said.

Whether the consortium will form a special purpose vehicle to develop the property or separately develop portions of the property based on a master plan still has to be finalized, said CHI corporate communications manager Jeanette Japzon.
“For now, it’s a partnership,” she said.