We don’t have to sacrifice the fire trees 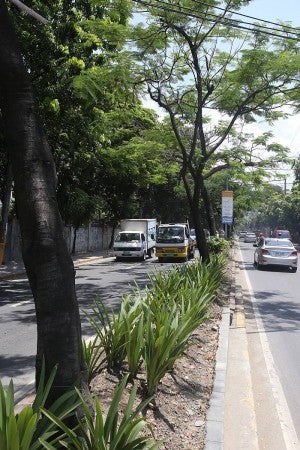 The center island of Pope John Paul II Avenue in barangay Mabolo, Cebu City is part of the ceremonial route for delegates of the Asia-Pacific Economic Council (APEC), whose series of meetings in Cebu start Aug. 22. The strip also faces three seminaries and a new Pavilion being built for the International Eucharistic Congress in January 2016. (CDN PHOTO/JUNJIE MENDOZA)

I find it very difficult to reconcile the cutting down of 34 beautiful, same-sized fire trees along a 600-meter stretch on Pope John Paul II from Archbishop Reyes Avenue to the Ayala Access Road (F.Cabahug/Cardinal Rosales).

This is a beautiful road and when the fire trees are in full bloom, it always reminds me why this is one leg of the “Sacred Loop.” The four roads that make up the loop are all named after Church spiritual leaders, the best known being Pope John Paul II. The red blooms are like the red vestments of the bishops.

There are several ways we can mitigate traffic and be prepared for the extraordinary traffic loads during the APEC meetings in August, September and October, not for the whole time but over seven to 10-day stretches. Therefore, to make a final and permanent sacrifice of this treed road for a temporary, albeit extraordinary need, seems incongruous.

The movement I belong to and currently lead, the Movement for a Livable Cebu, committed to Mayor Michael Rama that our expert members would work with others in civil society, business (like the Cebu Chamber of Commerce and Industry, Mega Cebu) and the city government to sketch a reasonable and effective solution that we had discussed with the mayor last July 14. That is still ongoing and we will deliver on that commitment.

However, as a private citizen like everyone else, I am making a personal plea to our city’s leader that if he could weigh just once more the pros and cons of eliminating the center island and all 34 fire trees with regard to other alternatives  being prepared for APEC in August and the International Eucharistic Congress (IEC) in January.

I do not question the mayor’s intent nor the amount of review and thinking that went into making his current stand. But just in case, perhaps we might get lucky and find a gem of a common ground in saving the trees while easing  traffic. Here are my personal suggestions that I have compiled from research I conducted and comments from other citizens and experts alike.

1. During peak days of the meeting, reroute the PUJs (jeepneys) away from this road. I believe CITOM has prepared an optimal plan for this.

2. Enforce no-left turns on the standard “short cuts” such as the road towards Tres Borces Extension and on to F. Cabahug Street.

3. Enforce the “No Stopping” zones on both sides.

4. No “wide U-turns” allowed. This must be strictly enforced.

5. No U-turns from the road below the flyover on the Banilad Road for cars making  a right to JPII then make a U-turn back to Archbishop Reyes to turn right back on the Banilad Road. (This compensates for not having to use the flyover).
The practice hampers the flow of traffic from Salinas Drive.

6. Man the main intersections of M.J. Cuenco, F. Cabahug and Archbishop Reyes with at least four  Citom/PNP personnel throughout the day.

7. Consider school “off days” during the expected highest peak days of APEC meetings.

8. Since Citom is doing a dry run prior to the event, all these other activities of strictly enforcing and penalizing those who break the rules could also be done before the event. This has to be done in full force so the message sticks in the drivers’ minds.

9. Schools could make up for lost time  before and/or after from the “off days” on Saturdays, when possible.

10. Advisories should be issued weeks before the event for people to stay away from these areas as much as possible. Perhaps identify this square area as a “no-drive zone” unless your business is in the zone. Others passing through can take alternate routes, planned well in advance.

11. Does the city need volunteers during the peak times? Perhaps they can do some of the more easy, mundane and “safe” tasks that the Citom/PNP personnel would have to do to in order to free them up for more traffic control tasks. After all, this is for all of us in the city.

I will personally volunteer where needed and where I am capable. There will be others like me.

These are just some of the ideas from a lay person. But perhaps, these, when combined from some of our experts’ plans and the soon-to-come proposal from civil society of our architects, engineers, urban planners etc. including the city’s various departments, we might find a solution without sacrificing the trees.

Read Next
All bases covered for Ironman 70.3