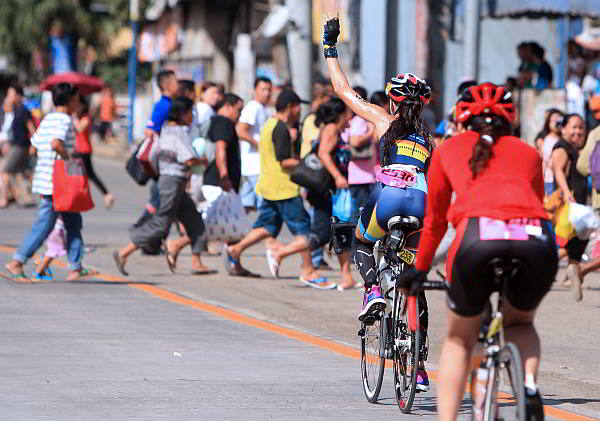 Triathlete shout at the uncontrolable crowd of the Cobra Ironman 70.3 as they pass on corner Plaridel St and AC Cortes ave in Mandaue City.(CDN PHOTO/TONEE DESPOJO)

Glenn Antigua, acting chief of the Traffic Enforcement Agency of Mandaue (TEAM), said it was a challenge for them to control the crowd, some of whom kept crossing the street even with the bikers passing through,
“Ang mga tawo ra gyod nga magsigeg labang-labang ang atong problema, the rest, wala na (People crossing the street are our only problem),” Antigua said.

The crowd along the sides of Plaridel St. screamed in delight when actor Piolo Pascual passed by on his bicycle smiling at them.

Virginia Naparete, a 54-year-old resident, said she didn’t mind the heat so long as she saw Pascual.

Enthusiasm
Antigua said they arrested Raul Arcenal, a resident of Alang-Alang, after he kept crossing Plaridel St. while the race was ongoing. Arcenal was allegedly drunk.

Princess Galura, program director of Sunshine Events Inc. which organized the event, said the marshals had a problem controlling the crowd which grew as the day went on. 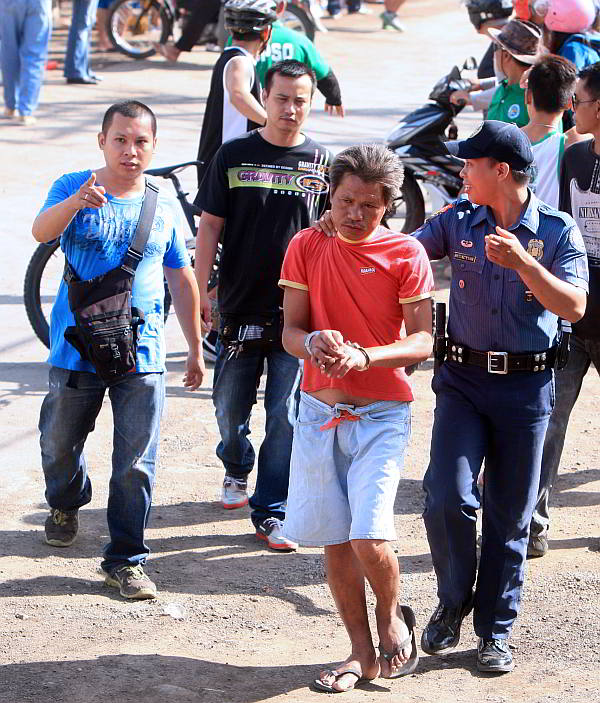 Mandaue City Police collared a man who refused to move out of the bike route. The crowd in Plaridel Street was uncontrollable at that time. (CDN PHOTO/ TONEE DESPOJO) 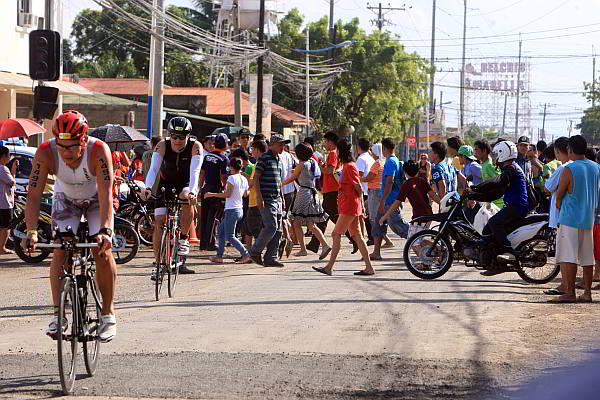 She said they may have underestimated the enthusiasm of the crowd.

“Everyone is cheering, even if it’s for people they don’t know, which is a great thing. Craig Alexander, a pro triathlete, even said it made this triathlon very special, seeing people smiling at them and cheering them on,” Galura said.

High risk
Galura also identified response time as something they can improve on for next year.

She said some athletes collapsed at the finish line and it took them two minutes to help them, delaying the other athletes.

Baltazar Tribunalo, Cebu Provincial Disaster Risk Reduction and Management Office chief, agreed that they have to work better on responding to incidents faster.

“We respond fast. But in cases like triathlons, there are so many factors to consider, so I believe that we can always do better for next time,” Baltazar said.

During their planning meetings, Baltazar said they tackled each part of the 70.3 kilometer course carefully, identifying high-risk areas and clustering more personnel there.

Troublesome
For the 1.9-km swim course, they deployed divers and underwater specialists outside the course area to make sure that the area is safe.

“Kusog ang balud, (The wave was strong yesterday), which was quite troublesome for the swimmers, but as far as I’ve heard, no serious incidents occurred,” Tribunalo said.

For the 90-km bike course, they have identified South Road Properties (SRP) and Plaridel St. in Mandaue as high-risk areas. Tribunalo said since bikers travel faster at SRP, there is a higher likelihood of collisions.

In Plaridel St., the road was asphalted only recently by the Department of Public Works and Highways 7, hence making the road slightly uneven and a high-risk area for bikers.

Cebu Provincial Administrator Atty. Mark Tolentino said if there was anything Cebu has to improve on with the triathlon, it was to make sure the roads were better.

“We should really avoid last minute road reconstructions next time. Otherwise, all I’ve heard from athletes are great things. The outcome of this event helps us to identify areas to work on for future events,” said Tolentino, who also competed in this year’s Ironman 70.3 as the runner for the TMT Relay Team.