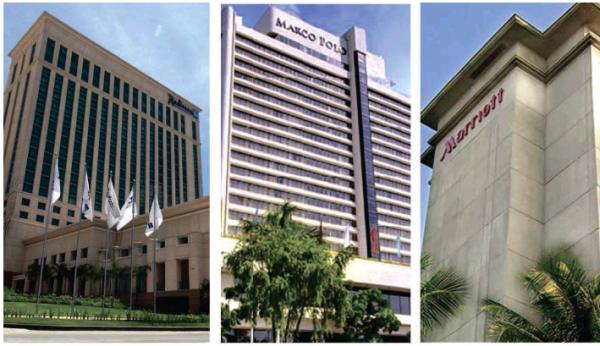 Radisson Blu, Marco Polo Plaza and Marriott Cebu are three of five hotel conference venues in Cebu that will all benefit from a high demand for accommodations for delegates of APEC meetings on economy and free trade.

Some APEC-venue international hotels in Cebu increased their rates in time for this month’s hosting of economic and trade meetings, a hike they don’t plan to  roll back.

They said the rates were a result of “market-driven” forces of supply and demand.

A press statement from Ambassador Marciano Paynor Jr., director general of the Asian-Pacific Economic Cooperation (APEC) 2015,  carried no hint of disapproval over the trend even as Cebu city and province officials continued their appeal for affluent hotels to “temper” their rate hikes to avoid damaging Cebu’s brand as a tourist destination.

“We have been informed that certain accredited hotels for the Senior Officials’ Meeting scheduled to be held in Cebu in September have quoted significantly higher rates,” said Paynor.

“We have verified that such rate-setting is market-driven and is aligned with rates charged by hotels that are part of their global networks,” said the ambassador.

No figures were mentioned in the statement.

A random check online and  phone queries by Cebu Daily News confirmed that room rates in Radisson Blu, Marco Polo Plaza and Marriott Cebu went up by  80 % or more    starting August 22, the first day of the series of APEC meetings in Cebu.

In the Marriot, a deluxe room would cost  P6,997 a night. But the lowest priced room starting August 22 was P17,799 including  breakfast and taxes, said  a reservation staffer who answered the hotline.

The rate issue was first raised last Friday in an APEC 101 briefing in Cebu by  Undersecretary Laura del Rosario of the Department of Foreign Affairs, who lamented that these Cebu hotels were “too expensive” .

She said APEC delegates, many of whom are government personnel traveling on careful budgets, had complained to her office that rates had gone up “120 percent from published rates”.

Cebu hotel managers declined to comment, all waiting for Paynor and the APEC National Organizing Committee (NOC) to first issue a statement. An emergency meeting was held with Paynor Friday night  in Cebu over the rate hike issue.

Paynor, in his press statement,  said there were nine accredited hotels for the meetings in Cebu and more than 30 others for delegates to choose from “to suit their needs”.

He said APEC delegates were advised about this and that those who chose hotels that were not conference venues would have a shuttle service.

Five Cebu hotels are APEC conference venues. Aside from the three earlier cited by the DFA for having  jacked up rates, Waterfront Cebu City Hotel and the Shangrila Mactan Resort and Spa are venues. They have not  applied steep increases, according to representatives.

Cebu Gov. Hilario Davide III, who arrived Tuesday from a Japan trip, said he wanted to meet with the Hotel, Resort and Restaurant Assocaition of Cebu (HRRAC) as soon as possible.

“We will tell them it is probably not advisable to increase rates just because of APEC.  We will ask them to temper their rates because, after all, this is a major internaitonal event with so many guests.”

“It is not in my nature to demand.  This is a business.  We also have to balance interests.  We will plead to them to lower their rates. Anyway, they will still profit from this one way or another,” he said.

Cebu City Mayor Michael Rama earlier expressed the same desire to sit down with HRRAC and appeal to their sense of promoting Cebuano hospitality as hosts of a major international event.

Vice Gov. Agnes Magapale, co-chair of the Provincial Tourism Council,  earlier said “We already met with the managers.  We will go up to their principals.”

About 100 APEC meetings for senior officials and related committees  are scheduled in Cebu between Aug. 22 to Sept. 11, then  again on Oct. 8 to 14.

About 3,300 delegates are expected, creating a sudden peak demand for accommodations in months considered “lean season” for Cebu city hotels.

“These rates had been negotiated already for quite some time.  It’s not that NOC has not negotated.  These have been published and agreed on,”  she said.

“It boils down to market demand. And for those who are used to attending conferences and conventions, this is a norm in hotels and any city for that matter, for any conferencere, international or regional. “We work on best available rates.  The rates are dictated by the market.”

Najar was at first reluctant to comment on this issue.

“All I can say is the appointed hotels in Cebu which are  venues of the APEC in August met with NOC chair when the matter concerned was brought up. So we did meet.  We gave the position of these hotels and we explained the rationale behind the rate system.

“Without preempting them, I am requesting the media to wait for this statement of NOC chairman which will clearly explain the matter.”