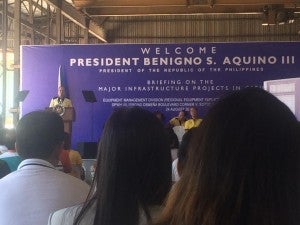 In a speech at the Equipment Management Division of the DPWH 7 Monday morning, the president reported the billions of projects that have been poured in the region.

His response came a day after Vice President Jejomar Binay, who’s also in Cebu, chided his administration for not giving Cebu enough attention. Binay made the statement in a news conference upon his arrival last Sunday, August 23.

Before his speech at the DPWH, Aquino conducted a windshield inspection of two major projects in Cebu right after his arrival — the Mactan Corcumferential Road project and the S. Osmena road concreting project.

DPWH Secretary Rogelio Singson, in a project briefing he personally gave to the president, said of the P42 billion worth of infrastructure projects in region 7 from 2010 to 2015, more than half or around P23 billion went to Cebu province.

In his opening speech, Cebu Gov. Hilario Davide III said the DPWH’s report on the projects will dispel the criticisms against the president for not attending to Cebu’s infrastructure needs.

“We know deep in our hearts that you love Cebu and you’ve poured billions in infrastructure projects for Cebu’s development,” Davide told the president.