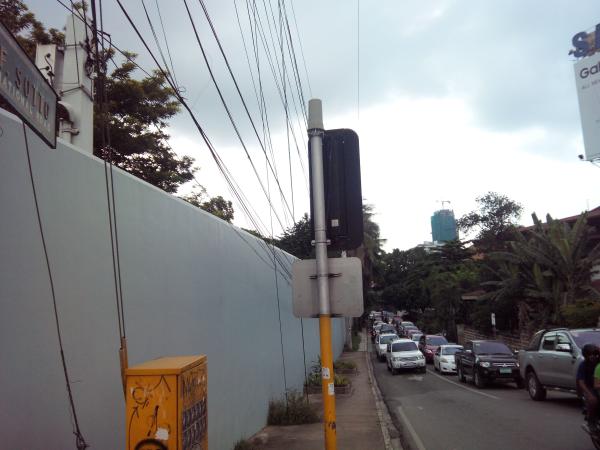 A portion of the wall of the Iglesia ni Cristo (INC) church on F. Sotto Drive will be taken down as part of a government road widening project, says the Department of Public Works and Highways, which has a court order for it. (CDN PHOTO/ LITO TECSON)

A portion of the wall of the Iglesia ni Cristo (INC) church along General Maxilom Avenue in Cebu City will be demolished  to widen the adjacent road in F. Sotto  Drive.
Church representatives aren’t happy about it, though.

They have asked  the Department of Public and Works (DPWH) not to proceed with the government project, saying it would  “destroy a religious edifice of historical significance” and violate their constitutional rights.

A demolition order was served the other day, said DPWH  project engineer Rachel Lumapas but  an INC representative told them the church is  still awaiting a response to their appeal by the DPWH central office.

The demolition of part of the wall is part of the P33-million road widening for F. Sotto Drive which connects Gorordo Avenue to General Maxilom Avenue.

According to DPWH-7 Chief Legal Officer Brando Ray Raya,  the  INC earlier stated that the project would  unduly disrupt constitutionally protected religious activities since it would destroy a religious edifice of historical significance.

Lumapas said the DPWH 7 will proceed with the demolition today.

He said the agency  confirmed that a copy of the  go signal from Public Works Secretary Rogelio Singson was already sent to lawyer Wilfredo Santos of INC’s Legal Department in Central Avenue, New Era, Quezon City.

The INC wall is also the subject of a Writ of Possession from the Regional Trial Court (RTC) Branch 18 in Oct. 18, 2014 which ruled in favor of the DPWH-7.

“After the issuance of the Writ of Possession, the INC wrote to the DPWH and the Office of the Solicitor General stating their issues on the project including its historical significance.”

“The Legal Service opines that since the expropriation of the land and structure is to be used for public purposes and that there is genuine necessity as determined by the Regional Trial Court of Cebu City for the implementation of the said project, there is more reason for the DPWH to continue with the expropriation of the said land and property,” read the reply of Legal Service Director IV Estrella Decena-Zaldivar of the DPWH Secretary’s Office.

Zaldivar cited the case of City of Manila vs. Chinese Community of Manila case in 1999 wherein the Supreme Court ruled that religious properties like churches and cemeteries are not exempted from the state’s power of eminent domain.

“This Office therefore opines that a religious edifice of historical significance is not exempt from the ongoing road-widening project of the government because under the right of eminent domain, the State enjoys the right to expropriate private property; it is understood that the same includes religious properties,” she said.

Raya said the legal opinion from the DPWH  central office showed there was no more obstacle to demolishishing the wall.

Canlas also invoked the court order for the project.

Read Next
‘No threat of demolition’