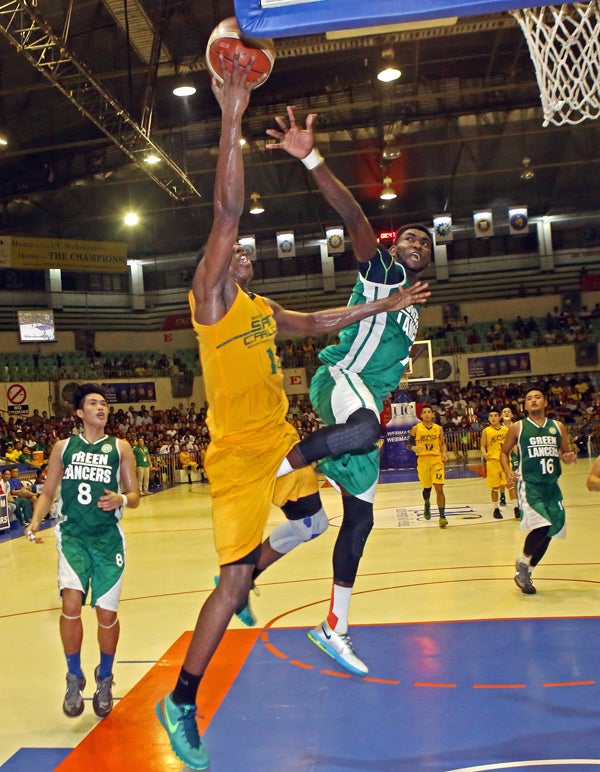 Shooster Olago of USC evades the defense of UV’s Steve Akomo in Game 3 of the Cesafi men’s basketball finals at the Cebu Coliseum.
CDN PHOTO/LITO TECSON

The University of San Carlos (USC) Warriors go for their first Cesafi title in school history but must brace themselves for a “different” University of the Visayas (UV) Green Lancers side when the two teams clash in Game Four of the best-of-five series today (Friday) at the Cebu Coliseum.
The Warriors moved to the brink of ending a 15-year title drought in the Cesafi after upending the Green Lancers, 87-76, in Game Three on Thursday, to give them a 2-1 series lead.
But USC head coach Britt Reroma reminded his team that the Green Lancers will be tougher than ever in today’s game.
“We must be ready mentally for a different UV team that will play with a sense of urgency,” said the former mentor of the San Beda Red Cubs.
UV is no stranger to overcoming tough odds. It  overcame a 0-2 series deficit in the 2012 Cesafi finals against the Southwestern University Cobras and completed the incredible comeback with a thrilling 64-62 win in the deciding Game Five.
But for Reroma, their chances of closing out this series starts and ends with maintaining their composure from tip off to final buzzer.
“We just really go back to maintaining our mental toughness. We keep on reminding them to stay focused and play together as a team, not as individuals. If we do that, consistency will be there for us on both ends in Game Four,” added Reroma, who was actually celebrating his birthday yesterday.
FORCED SHOTS
With their season and their bid for an 11th title in the Cesafi hanging in the balance, UV head coach Gary Cortes shared that he and the rest of his coaching staff must find ways to bring back harmony to an offense that resembled night and day in the last game.
After riding the hot hands of spitfire guard Jun Manzo who scored 21 in the first 20 minutes of action to turn the tables on the Warriors, Cortes noticed that several of his players inexplicably started to angle for their own time in the spotlight in the second half, forcing up shots instead of running the offense.
Manzo, who exploded for 21 points in the first half, failed to sustain his rhythm and managed just four the rest of the way to end up with 25.
“We suddenly weren’t executing our plays properly because some players wanted to go one on one and force shots. Players were grumbling about getting the ball,” shared Cortes, a former UV player who made a name for himself on the defensive side of the ball.
Ironically, UV did not put up much of a stand on that end, especially with 6-foot-10 center Steve Akomo riding the pine for most of the second half after incurring his fourth foul in the third. He eventually fouled out with six minutes left in the game.
“I have to get Steve (Akomo) focused. He must understand that he needs to stay on the floor and to play his game if we are to have a chance at extending this series,” quipped Cortes.