Capitol to train guides for safety of tourists 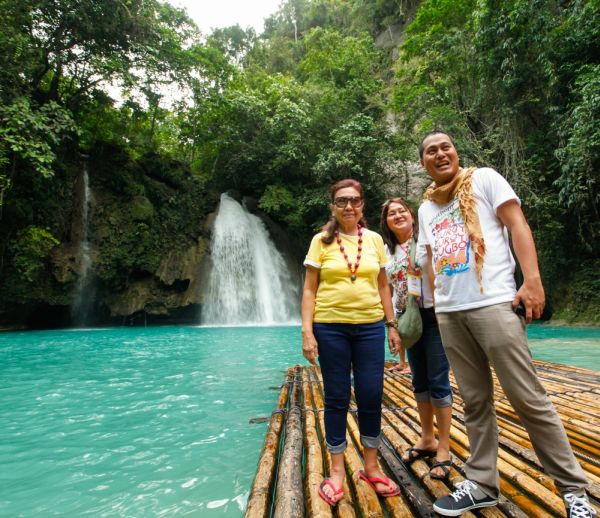 Kawasan Falls is among the popular tourist destination in southern Cebu. Seen in this January 2014 photo is Vice Gov. Agnes Magpale with Suroy-Suroy Sugbo tourists.

Magpale, chairperson of the Provincial Board Committee on Tourism, said there is a need to streamline canyoneering and other related activities in the area following the accidents that have happened in the past year.

Last Tuesday afternoon, a female cashier of a mall in Cebu City drowned after she slid into the water in Kawasan Falls in barangay Matutinao, Badian town.

The casualty was identified by local police as Geraldine Indig, 21.

Police said Indig  may have lost her footing while standing on a rock taking photos of herself and got swept away by the water’s strong current.

Magpale suggested that the town should have  lifeguards at strategic areas in Kawasan to ensure the safety of both foreign and local tourists.

She also said signages should be put up to warn tourists about the hazards of the waterfalls and adjacent areas.

However, Magpale said they are more worried about the popularity of  adventure sports.

“Our bigger worry is for canyoneering which is more dangerous,” she told reporters.

The vice governor said they will be soon be conducting a tour-guiding seminar by Provincial Disaster Czar Baltazar Tribunalo Jr. and emphasize to tourists and guides  the need to wear  complete safety gear.

Tribunalo also requested for handheld radios for the tour guides.Tour guides will have to  undergo  100 hours of training.

Canyoneering and related activities in Badian and Alegria towns were suspended after the accidental death of a canyoneering guide who drowned last year.

“I would like to assure the public that we are doing everything, but this can’t be completed right away,” said Magpale.

She said the  provincial government offered to build a  briefing station at the entrance for canyoneering activities in Alegria town where guides  can  lay down rules during the excursion.

Tribunalo is still drafting  guidelines that will be presented in the briefing station, said Magpale.

She said  local government units are still free to run tour  activities in the area while the provincial government will continue to remind them of their responsibilities.