Well-ventilated stations with curved roofs patterned after flower petals and yellow grills will be built along the Cebu Bus Rapid Transit (BRT) route in Cebu City in the next two years.

Average waiting time for passengers will be only four minutes during peak hours.

The proposed “Flowers of the Sun” design by Korean firm Kunhwa Engineering and Consulting  is part of the Detailed Engineering Design study for the P10.6-billion BRT project.

“It reflects the sunny disposition of Cebu, the bright and cheerful nature of our people, and our festivals,” BRT project head Rafael Yap said in a presentation at City Hall yesterday. 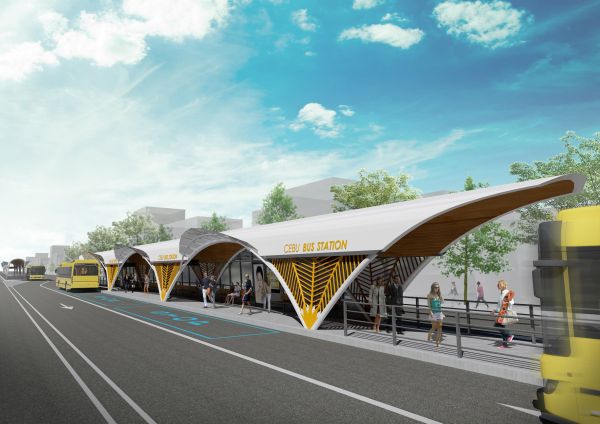 The proposed design for the Bus Rapid Transit (BRT) terminal.

Bidding for phase 1 of the World Bank-financed BRT will start next year for the Osmeña Blvd. segment from Capitol to corner P. Del Rosario St.

Full operations will materialize in 2017 at the earliest or after the Aquino administration.

The BRT station will have a system  that requires passengers to buy their tickets before boarding. It will also have real-time transit information, advertising space, and a waiting area.

“The mayor is already okay with the basic design. We will just go through some improvements. The BRT Technical Working Group will recommend (the design) to the DOTC (Department of Transportation and Communication),” Yap said.

Bidding and construction of the facilities will  be done by segment.

Phase 1,  Osmeña Blvd. from Capitol to corner P. Del Rosario St., will be auctioned next year.

“We chose Osmeña Blvd. as the first to be constructed since there is not much road right-of-way acquisition involved, and it’s already wide enough,” Yap said.

He said the detailed engineering study is on schedule, although they are asking the consultant to extend the study for a couple of months.

Since the start of the study last May, Kunhwa  focused on  hydrological and topographical surveys. The consultant also assessed traffic facilities along the BRT route.

Yap said  15 symmetrical stations  and 6 assymetrical or bilateral ones will be built.

Symmetrical stations, which are  4 meters wide and  83 meters long, will be built in areas with wider roads. These will have parallel facilities for the northbound and southbound lanes.

Asymmetrical stations,  which are twice as along  at 166 meters, are suited for narrower areas. These will have facilities built one after the other with a pedestrian crossway in between.

Barriers will be installed at the end of each station to prevent other vehicles from colliding with the raised platforms. Barriers  in the middle of the road or on the sidewalk will prevent jaywalking.

The project is funded by a $141-million loan from the World Bank and a $50-million credit facility from the French government.