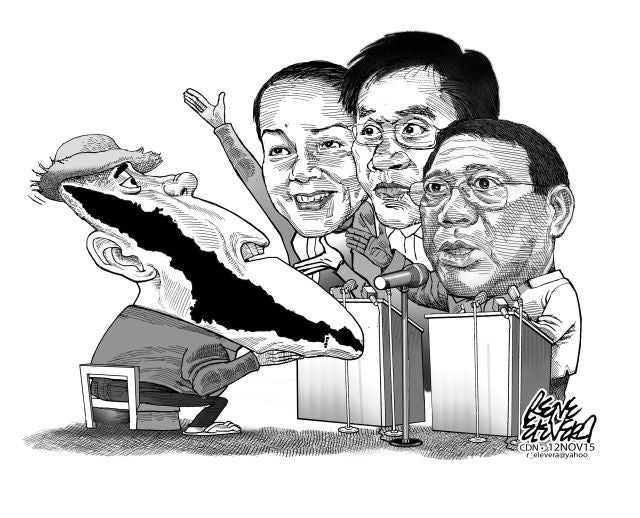 First, he’s   scaled down the proposed 2016 budget allegedly   to give room for the next administration to do its own planning.

Second,  he initially said he’s  willing to sign a guarantee that would  protect the city government from liability in case the court  rules against against city officials on the  petition filed by former prosecutor Romulo Torres.

Torres’ “taxpayer’s suit” is an obvious straw horse   fielded by the mayor’s critics to question the lawfulness of public bidding as a mode of selling lots in the South Road Properties, which gave the Rama administration an   P8 billion downpayment,  which is the sole source of  SB No. 1.

The clear objective is to deny the mayor his windfall that can make his reelection bid glide  smoothly in projects for which he would get lavish credit.

Then the lawyer in him saw the dilatory tactic  for what it was.

What bond coud  he sign when the court hasn’t required one, and when the court even threw out a request to issue a temporary restraining order against the City Council’s right to pass a budget?

The City  Council, which is dominated by the Bando Osmeña-Pundok Kauswagan (BO-PK) bloc, knows that it can’t stall budget liberations forever.

But the BO-PK will sure try to the end of the year.

So here’s where the squeeze will test the confidence of both camps in the intelligence of Cebuanos.

Approval  of SB 1 may come at the 11th hour. Or not at all. The stalemate can drag to the new year.

If the poison freezes    the 2016 annual budget as well, by law Cebu City would have to use a reenacted budget equivalent to the current year’s pie.

What the public will remember is not the shrewed  tactics that deny either side ammunition.

They will experience and remember  the consequence of non-delivery of basic services.

Voters wouldn’t care less about the bonuses of City Hall employees in SB No. 1, but they will remember piles of trash uncollected outside their houses and streets, a demoralized police force and fiscal’s offices who haven’t received their subsidies,  and other service gaps that disturb their daily lives.

It’s taxpayers’ money being wrangled over. Both  camps should be ready to  take the credit or  the blame for its  use or non-use in May 2016.

Read Next
‘My Bus’ redux