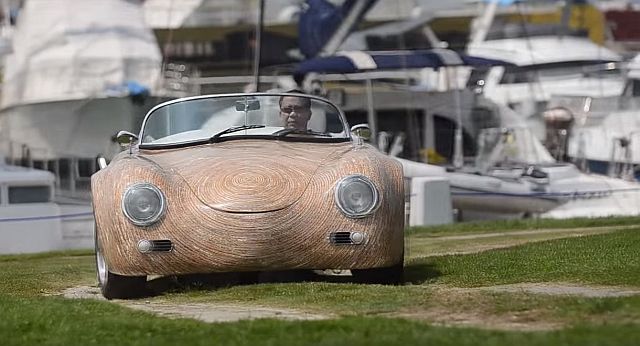 Businessman Clayton Tugonon test drives his Porsche 356 made with a body overlay of rattan and coco flowers stalks in this video grab of his UNA car video. The unique car design draws a lot of attention at the APEC expo in Manila.

The sign said “Please don’t ride” but visitors of Mandaue City’s exhibit in the international expo for the APEC in Manila are agog over the sports car and can’t help checking it out.

Communication Secretary Sonny Coloma got into the driver’s seat with Mandaue Mayor Jonas Cortes as his passenger  during the exhibit’s opening on Wednesday evening — just to get a feel of the interiors.

The car, a replica of a 1959 Porsche, has a surface of  rattan and coco flower stalks   woven around the sports car.

The owner and designer, Clayton Tugonan, said  he was happy the Mandaue city   exhibit, of which he is curator, has been well received.

“When they saw the car, they were blown away, especially when they learned it’s made of coconut and rattan.  They just can’t believe it.  I’m happy and honored,” he told Cebu Daily News.

Tugonan has another purpose aside from raising the profile of Mandaue city in the international conference.

He said he  hopes to draw the  attention of President Benigno Aquino III to  the dilapidated Cebu International Convention Center (CICC) to get its renovation funded by the national government.

Pride naman gud na (The  Mandaue Chamber of Commerce  will   stand up to the challenge to run it. We’ll have a permanent showroom there. Mandaue will be  known and we can showcase our products there. It’s already our source of pride,” said Tugonon, a chamber member.

“(Presidential spokesman Edwin) Lacierda was there this morning (Saturday) I think somebody mentioned that we are from Mandaue, and that we need a exposition center. I’m sure he would really help,” he said.

“Ikaw presidente unya makakita ka naningkamot, maka impressed di ba? (If you’re the president and you see somebody working hard to achieve something. You would be  impressed, right?)” he said.

The CICC is in serious  disrepair after the 2013 earthquake and supertyphoon Yolanda and has never been used. Gov. Hilario Davide III  refuses to spend any provincial funds for it because  of a pending graft case  in the Ombudsman about the CICC, which is co-managed with Mandaue City and built on land owned by Mandaue.

President Aquino earlier said the national government would let the Department of Trade and Industry (DTI) renovate a part and use it for a showroom, but negoations about the cost of repairs and who would shoulder it is still under study by Malacañang.

Mandaue’s exhibit area for APEC is strategically  located near  the International Media Center,  where journalists have to pass by to reach the dining hall.

Mandaue city is the only local government invited to have a booth in the  APEC exhibit at the World Trade Center in Manila.

“This is the moment for us to put on a  good show. Puslan man magpakita ta nindoton na lang. (Since we’re showcasing our selves, we may well give it our best shot.)

“We are happy even APEC organizers  happy  we have something to  proudly display.”.

(Mandaue is like a spec of dust that can’t be seen by the eyes, but it can get into your eyes. That’s what’s happening now.)

Mandaue’s booth is the only one in the expo exhibiting furniture. It also has a long  chair made of  wood that used to house termites or “balay sa anay,” and a larger-than-life horse sculpure made of driftwood.

Tungonan brough 18 of his creations, including the exotic chair.