BILLBOARD DOWN FOR ‘JESUS’ EVENT 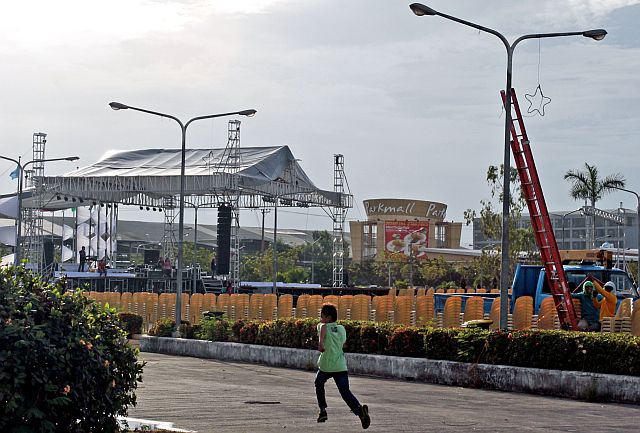 A stage is set up with hundreds of chairs in the parking lot of Cebu International Convention Center for a ‘Jesus Reigns’ praise celebration that faces the yellow ‘Never Again’ billboard hanging in the building’s facade on Saturday afternoon. By evening, Capitol workers were ordered to take down the billboard. (CDN PHOTO / JUNJIE MENDOZA)

In the end, it took a Christian “praise concert” to stop the further display of the controversial “Never Again” billboard hanging in front of the Cebu International Convention Center.

The move came as a relief for organizers of the Jesus Reigns Minisitry, which is scheduled to hold on Monday, Nov. 30, a major outdoor praise and worship celebration called “Jesus Reigns” in the CICC parking lot.

One of the strict guidelines of the event, to be held simulatneously in 80 provinces, was that “no advertisements” or printed promotional materials are allowed at the venue because “Jesus should be the only star of the day”, according to the ministry’s website.

Some members gathered in the afternoon, preparing the stage and briefing volunteers about their tasks –- but this did not include manually unloading the massive 60-foot-by-20-foot banner.

The order to take down the streamer came from Provincial Administrator Mark Tolentino after weeks of controversy over its political message and who were the real owners.

Tolentino was quoted by a colleague as saying “The bottom line is it is going down before the 30th so as not to make it appear that ‘Never Again’ refers to ‘Jesus Reigns’.”

About ten staff of the General Service Office (GSO) were at the site, waiting for the Christian group members to wrap up so they could start dismantling the giant tarpaulin when CDN dropped by.

The group that claimed to be the ones who mounted it, a new formation called Cebuanos for Good Governance and Development (CGGD) was nowhere in sight.

Sought for comment earlier in the day, CGGD spokesman Renil Oliva said his group was pleased that Jesus Reigns organizers showed respect for “freedom of expression” by backing out of a decision to roll down the banner.

When calls to remove the banner earlier surfaced, Oliva said CGGD volunteers would help take it down themselves.

They said the banner was part of preparations for the launch of an anti-corruption campaign in Nov. 27, which was later moved to December 10.

The streamer suddenly appeared in front of the CICC without a permit or prior permission from the Office of the Governor in later October, although Gov. Hilario Davide III later said it was all right to keep it there because the message was in line with his anti-corruption advocacy.

The yellow color and an additional billboard that said the cost of the CICC was “P840, 202, 438.05 MILLION OF PEOPLE’S MONEY WASTED !!” clearly referred to his predecessor, former governor Gwendolyn Garcia, who had the CICC built for Cebu’s hosting of the 2007 ASEAN Summit.

This prompted Garcia and lawyer Ervin Estandrate to file complaints last week with the Office of the Ombudsman Visayan against Governor Davide for his alleged “neglect” in letting the CICC fall into further disrepair after the 2013 earthquake and supertyphoon Yolanda and using the billboards for “political sloganeering”. 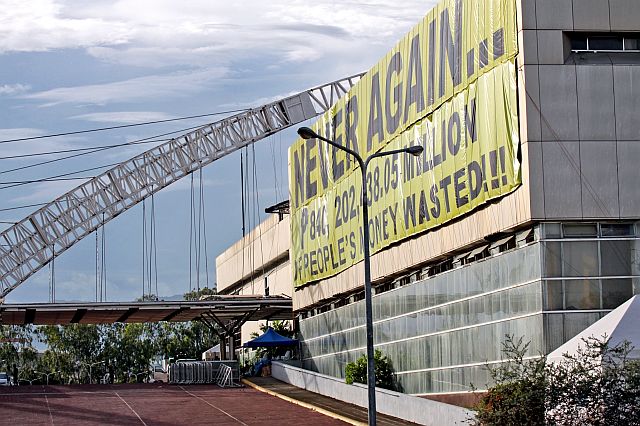 NOT PART OF POLITICS

“They no longer wanted to roll down the banner because a lot of people have been asking about it. They said they don’t want to be involved in any issue,” he told CDN .

Abing said his representative met with some of the organizers in the afternoon.

“They decided that they will go on with their activities without removing the banner,” he said.

A member of the executive committee who wished not to be named, told CDN they refuse to answer any questions about the yellor tarpaulin because they “don’t want to be part of politics.”

Organizers had earlier asked the Capitol to remove the “Never Again” banner so they could place their own streamer.

Abing said the original plan was to cover the whole banner, but the Christian group was discouraged when they found out, after surveying the huge tarpaulin, that it would cost P78,000 to make a similar-sized one.

Instead, they asked to temporarily roll down the banner for their event on Monday and even volunteered to do it.

Abing said the Jesus Reigns organizers were not made to pay for use of the the CICC grounds but would be charged for electricity consumption.

At 4 p.m. yesterday, tents were being set up in the area. Stacked monobloc chairs were lined in neat rows in the parking lot.

A stage was already set up at the edge of the CICC complex near the road below flagpoles where ASEAN flags used to be raised. Performers on stage would have a clear view of the “Never Again” tarp.

Governor Davide, who admitted after the controversy blew up, that he gave “implicit” consent to the CGGD to put up the yellow banner by tolerating its presence, and even suggesting at one point to add the cost of the CICC to its message, has come under fire for allowing a government facility to be used for a partisan political attack ad against Garcia.