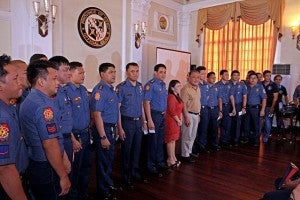 Cebu Governor Hilario Davide III poses with some of the policemen who received cash from the Capitol. (CDN PHOTO/LITO TECSON)

Close to 60 policemen from Cebu province received cash incentives from the Capitol for their role in isuccessful anti-drug operations.

The Cebu Provincial Anti-Drug Abuse Commission (CPADAC) on Wednesday awarded the incentives to personnel of the Samboan and Danao City police stations as well as the Cebu Provincial Police Office (CPPO) intelligence branch.

The awarding was held at the Capitol’s Dignitaries’ Hall.

For a successful operation last May 24, the chief of the Samboan police station was awarded P10,000 while his 12 personnel were given P5,000 each.

The operation in sitio Punong yielded 117 grams of shabu valued at P1.38 million and led to the arrest of two suspects.

On May 13, the Danao City police confiscated 30 grams of shabu worth about P354,000 and arrested one suspect in barangay Poblacion.

They confiscated 90 grams of shabu valued at P1.06 million and arrested one suspect and one of the Catmon police station’s target personalities.

Senior Supt. Noel Gillamac, chief of the Cebu provincial police and Supt. Rodolfo Albotra Jr., chief of the intelligence branch, were each given P10,000 while the police personnel received P5,000 each.

Joey Herrera, CPADAC executive director, said the Cebu provincial government set aside more than P3.6 million for the incentives program in 2015 for police personnel to push the anti-illegal drugs campaign.

Another P1.4 million will be ceremonially presented in January next year.

Herrera said there were two more successful operations in Danao city and seven conducted by the PIB, but their checks were not yet ready due to the holiday break.

PO1 Demar Muaña of the San Francisco police station was awarded P30,000 for his role in a drug operation in June this year.

Muaña suffered six gunshot wounds in the line of duty. Two suspects were arrested in the operation.

“I wish these incentives will be one of your best gifts this season in the same manner that your accomplishments have been one of the best gifts to our people,” said

Meca said Gov. Hilario Davide III has made the drive against illegal drugs a priority in his administration.

“We are very happy to give these incentives as a modest gesture in recognizing your efforts in making this province peaceful and drug-free,” she said.

Governor Davide said he recognizes that the pay in the police service is modest and that operations involving drugs are very risky.

“We realize the risk you all have to face in this campaign. I thank you for your coordination, efforts and dedication,” said Davide.

The CPPO conducted 1,301 anti-drug operations in the province from January to November this year, said Supt. Albotra.

They arrested 170 drug personalities; confiscated 5.5 kilograms of shabu; 1,403 dried leaves and 81 sticks of marijuana, all valued at around P73 million, he said.

Read Next
Portia and Mabe