The grizzled veterans of the Alaska Aces schooled the new kids on the block, the Global Port Batang Pier, 100-76, to tie the best-of-seven semifinals series in the 2016 PBA Philippine Cup up at 1-1, last night at the Smart-Araneta Coliseum.

In an emotionally-charged game that saw the two combating teams tie the record for most technical fouls in a game with 16, it was the battle-hardened Aces that showed more poise and resolve as they started to pull away in the third before blowing the game wide open in the fourth to even the semifinal series up. 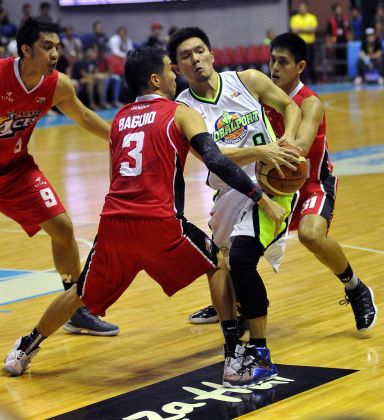 Banchero had 18 points, Jazul added 17 while Abueva notched a double-double of 11 points and rebounds.

The game was marred by a near free-for-all in the first which involved players and coaches alike from both teams. The initial scuffle involved Cebuano Dondon Hontiveros of Alaska and David Semerad of Global Port.

Not long after, Batang Pier forward Jay Washington and Abueva got involved as tempers flared wildly. When the dust settled, eight technical fouls were called on Alaska and five were whistled on Global Port as a result of that incident.