A desperate young woman.  A fake pregnancy.  And in the end, love that was not returned.

For two-days, 26-year-old Melissa Londres lived the illusion of being a first-time mother.

After her arrest on Tuesday night, police said the call center agent and her boyfriend will be charged with kidnapping a newborn infant from the Vicente  Sotto Memorial Medical Center, where the baby’s parents were tricked  into thinking Londres, who dressed in  newly bought white scrubs, was a nurse. 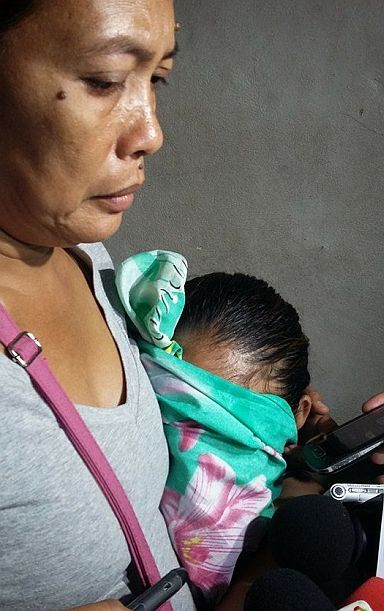 A tearful Melissa Londres covers her face and presses close to her mother Mary Ann in the detention cell of the CIDG-7. The young suspect sobbed out an apology. (CDN PHOTO/ APPLE TAAS)

Baby Prince Niño Celadenia, the son of a retail merchandiser and a housewife, was rescued unharmed by police from a rented room in Lahug occupied by the couple.

Londres, who first insisted that she was the baby’s real mother, yesterday broke down when her mother Mary Jane, arrived in the police camp  bringing her breakfast, and coaxing her to apologize.

In between sobs, burying her face in her mother’s side, Londres said she stole a stranger’s infant because she wanted to stop her estranged boyfriend of over one year from leaving her for good.

She had told him months back that she was pregnant, and now had to prove it.

To make it look real, she at times  had stuffed her blouse to fake a bulge in her stomach that some neighbors actually saw, said the police.

“First love nako siya, iya jud ko giampingan.” (He was my first love. He really took care of me).

Londres spent the night in the office of the Criminal Investigation and Detection Group (CIDG) 7, where police also hauled in her boyfriend,  Philip Winfred Almeria, 24, a call center agent in her workplace.

Londres said she and her partner took good care of the baby in those two days. But getting caught brought on her worst nightmare.

(I just regret this very much because it was not just my dignity that was destroyed, but my family’s because I didn’t want him to leave me.)

In a separate interview, the boyfriend, distanced himself from the trouble, saying it was over a year since they broke up.

Almeria insists that he, too, was fooled into thinking the baby was his son.

(I didn’t know she would do something like that. I’m partly to blame because she was in love with me – even though I’m not good looking. I know that she was desperate to get back together but I never demanded that we should have a child.) 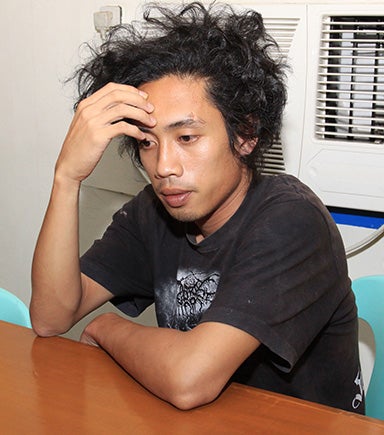 Her arrested boyfriend, Philip Winfred Almeria, also a call center agent, says he didn’t know the baby presented to him was stolen from another woman. (CDN PHOTO/LITO TECSON)

(One shouldn’t use love as an excuse to commit a crime. She said she loved me.  If she really loves me, the only thing I am asking for  is space. Why can’t she give that to me?)

Londres said their relationship bloomed  in April 2014. They met in Teleperformance Philippines, the call center company where they currently work.

“I was his eighth girlfriend. I was the only one he took seriously. I was even introduced to his parents,” Londres narrated in Cebuano.

When they broke up sometime in May, Londres said she went home to Mandaue City but found it hard to accept the separation.

At night, trying to fall asleep, she said kept thinking of her boyfriend.

“All my life, I never tried to file for leave from work, but one night, I just kept knocking on his door. I had a key but the door was locked from the inside.  I had to enter through the window,” she said in Cebuano.

Londres worked her way through college and finished a degree in business management accounting from the University of Cebu Lapu-lapu Mandaue Campus.

In an interview, she said she acted on impulse when she bought the white scrubs in a downtown mall Monday morning.

By noon,  she was walking out of VSMMC with baby Prince Nino in her arms and boarded a taxi.  She said she returned to the mall to change to street clothes, and left the white uniform in a dressing room.

When she arrived at the rented room of her boyfriend in Lahug at 4 p.m., she told him she had given birth to their child, and was naming him Phil Winfred, inspired by the “father’s” name.

Londres was  unaware that photos and videos of her taken by CCTV cameras in the hospital were aired on social media and TV, and splashed in front pages of local dailies. The material was released by the police for a full-scale manhunt.

Initial claims that Londres had suffered a previous miscarriage have yet to be verified.

Her mother Mary Jane, 47, said she visited the baby in Lahug and assumed it was her grandson.

“Kahibaw ko nga buntis siya kay wa jud na siya dug-a pila ka buwan. Mangayo lang jud mig pasaylo nila kay makita man pod sa ilang balay nga giatiman jud nila ang bata. Gipalitan og gatas (I was aware that she was pregnant since she did not have her monthly menstruation. We just want to apologize. As you can see, the boy was well taken cared of), pointing to supplies of milk and a bassinet of all-blue pillows and bed clothes.

Senior Supt. Marlon Tayaba, acting CIDG chief, told reporters kidnapping charges would be filed against both employees.   The offense is non-bailable if evidence of guilt is strong.

“We have a tight case based on the recovery of the child and the identification of the female suspect. We have yet to determine the involvement of Almeria, and are looking for evidence that he had knowledge about the kidnapping,” he said.

Policemen went to VSMMC yesterday to visit the baby and his parents, Jaybee and Jonathan Celadenia.

The mother  identified the female call center agent from a mugshot photo shown by CIDG-7. Londres was identified as the fake nurse who took her child last Monday noon.

Tayaba said the abduction was well-planned and that Londres  may have frequented the hospital before since she was familiar with its layout and activities.

“There were swabs taken by the CIDG for DNA testing. The mother yesterday underwent a stress debriefing,” said Aquino.

A P100,000 cash reward raised by concerned VSMMC’s employees was given last night to the informant who led police to the couple’s rented room in Lahug.

Aquino said the newborn boy, who was brought back  Tuesday night, was in good health and ready for discharge.

Seven security guards of GAPROTECT were advised to go on leave while an investigation is underway into the Jan. 4 security breach in the government hospital, which Aquino called an “isolated”case.

VSMMC has 71 guards securing the vicinity of the hospital. He assured that hospital security would be strengthened.

“This is an eye-opener on the need to follow strict protocols and the importance of high definition CCTV cameras,” he said.

“The procedures are there. I don’t think there’s a need to change them.  We will look at the shortcomings and improve,” said the hospital chief.

Read Next
Dance to a new Sinulog beat