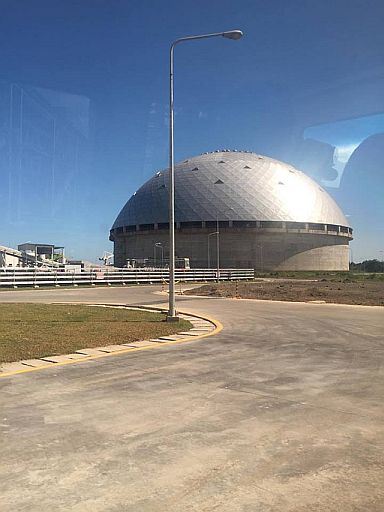 A look at the coal dome in the Therma South, Inc. coal-fired plant. A slightly bigger version of the dome will be seen in AboitizPower Corp’s Therma Visayas plant in Toledo by the end of 2017. (CDN PHOTO/ VANESSA CLAIRE LUCERO)

President Benigno Aquino III, Energy Secretary Zenaide Monsada and Cabinet officials joined local government officials and Aboitiz executives led by CEO Erramon Aboitiz were on hand for the inauguration of the 300 MW coal plant which is seen to reduce the power shortage experienced in Mindanao.

“Over the past couple of decades Mindanao has suffered from several power crises primarily brought about by drought that because of it’s over-dependence on hydropower, resulted in short flow of power with outages extending up to 8 hours a day during the summer months,” Aboitiz said.

The plant features a coal dome, a storage facility for coal that reduces the amount of dust particles in the air.

A similar plant, the Therma Visayas, Inc (TVI) is under construction in Toledo, City. Once completed in 2017, it will be bigger than TSI and will also house AboitizPower’s second coal dome. TVI will supply 340MW to the Visayas region.

“We would bring in the most modern facilities and would operate under the strictest environmental standards. The days of highly polluted coal plants are a thing of the past and would definitely not be tolerated under AboitizPower’s watch,” Aboitiz said.