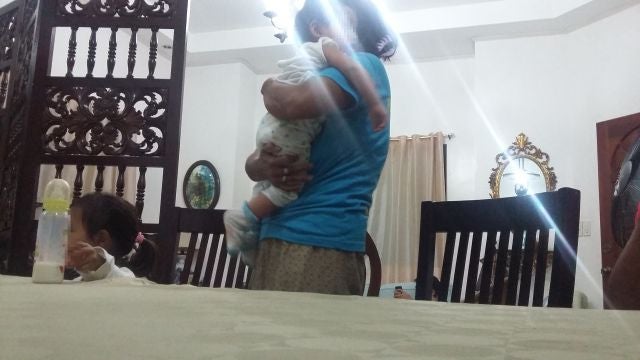 A 28-year-old former secretary spent the weekend in jail after a prosecutor made a “citizen’s arrest” in a parking lot in downtown Cebu City to stop her from pestering him for child support.

Jocelyn Sala was at the Regional State Prosecutor’s Office on Friday afternoon looking for Provincial Prosecutor Dionilo Mantos, the father of her 8-month-old baby, to have the sick child hospitalized.

Her request irked Mantos who tried to drive away in his car.

Mantos said the woman “threw a stone” at the vehicle, damaging the car door in the Metro Parking Lot on Osmeña Boulevard.

The prosecutor, who is married, cited Sala for “direct assault under a citizen’s arrest.”

The woman was taken away in a patrol car, and since it was a Friday afternoon, she was detained over the weekend at the Carbon Police Station and has to wait for today to seek official release.

On her first night behind bars, Sala said she couldn’t sleep just thinking about the sick baby and a 5-year-old daughter she had left with relatives before seeking out the prosecutor.

(I’m really scared. Who am I compared to him? I’m up against a fiscal.)

Some police officers at the station took pity and passed the hat for donations so the mother could send money to her uncle to buy milk and diapers.

Poca, a consultant at the Women and Children Protection Unit (Pink Room) of the Vicente Sotto Memorial Medical Center, said both kids were suffering from a viral infection.

She prescribed medicines for fever and colds, then sent both children home with their grandmother. She also advised that the children be brought back to a doctor if the fever persists.

At the Carbon Police Station, Sala admitted that she had a stone in her hand when she tried to stop Mantos from driving away in a car, but said the vehicle suddenly took off too fast for her to use the rock.

Sala told CDN that she was 17 years old when she met the lawyer and fell in love. Their relationship bore two children aged five and eight months.

She used to work as a secretary in a clinic, but currently has no job.

Sought for comment for this story, Mantos told CDN by phone: No comment. It’s premature to issue a statement.”

The case of the desperate mother has drawn the attention of advocates against violence against women.

Prosecutor Liza Jorda went to the Carbon police station on Saturday to have the woman’s affidavit taken.

Jorda, member of the Inter-Agency Council Against Trafficking (IACAT) and Violence Against Women and Children (VAWC), said she was alarmed to see part of what happened since she was in the building last Friday.

“I saw the woman inside the police car while the car of Mantos was with the convoy,” she said.

After making initial queries, Jorda said she learned that the woman was following up Mantos for child support.

“We acted on the case since she (the woman) sought help from our office since they have two children with Mantos,” she said.

The paternity of the children is confirmed in a Sept. 23, 2015 certificate of “amicable settlement” issued by the office of the Lupong Tagapamayapa of barangay Yati, Liloan town.

In the document, Mantos pledged to give Sala P2,000 a week or P8,000 a month for the needs of their children on condition that Sala would not bother him in his office and would drop prior complaints she had filed against him.

For her part, Sala promised to mind her manners, especially in front of Mantos’s friends.

And in times when the children get sick, it said Sala had to use savings from her P8,000 a month allowance. Both signed the agreement.

In an interview yesterday, Sala said she felt powerless and feared for her life because her former lover was already hostile.

“Naa pa to siyay ingon nga kung naa gani mahitabo kung mataktak siyas serbisyo tungod nako, iyaha kong ipapatay (He once told me that if he ever gets terminated from the service because of me, he would have me killed),” she said.

In his complaint with the Carbon police station, Mantos made it a point to state that he was on “official duty” as state prosecutor when the encounter happened on Friday.

He said he was about to leave the parking lot on board his Isuzu Ertiga when the woman “took a stone and threw it,” hitting the right front side door, causing P15,000 worth of damage.

Sala, in an interview, said she was not seeing him out for official business but for a personal appeal for financial help for their sick daughter.

It wasn’t the first time she went to the government office, she said.

On Thursday, she said she followed him to Catmon town where he had a court hearing.

His last financial assistance came on Tuesday but the mother said it was all spent already on milk, diapers and Cerelac baby food.

Sala said she first texted Mantos that the baby had a fever. When he didn’t reply, she tried calling him. Mantos allegedly told her he would not give money that week because of her “behavior” toward him.

On Friday, desperate to look for money for hospitalization of her baby, who had suffered pneumonia before, she left the child with relatives to approach Mantos again.

She said she arrived about 2 p.m. at the Regional State Prosecutor’s Office in downtown Cebu City last Friday. Sala said the fiscal ignored her and went downstairs to his car and got in.

(He got on board and just looked at me. I asked him to give me money so I could go home, but he just closed the glass window. When the car started, I tried to stop it. I brought a rock but the car suddenly moved forward and I had to move aside, but the rock accidentally scraped the car.)

Sala told CDN that Mantos hurt her in front of their 5-year-old daughter last Oct. 15, 2015 which was recorded in a blotter report at Liloan Police Station.

But then she refused to file charges.

Meanwhile, Prosecutor Jorda expressed her disappointment at the police handling the case, who did not look deeper into the circumstances of the “direct assault” charge to see it involved a woman’s plea for child support.

She said she asked the police investigator in Carbon station to evaluate the situation before filing a case of direct assault.

She asked the police to visit the office to take statements from guards about what they saw, “but PO2 Elrich Catacutan did not show up,” the fiscal lawyer said.

“It is the function of the investigator to check what really happened. I called him twice before 5 p.m. to get statements and to ask him not to immediately believe what the fiscal said happened,” she added.

Police officer Rose Santolorin instructed the Women and Children’s Desk officer at the Carbon station to record the incident as a case of VAWC – violence against women.

They went to the Carbon police station to get Sala’s affidavit and other evidence.

Jorda said she was disappointed “that a fiscal who knows the law is involved” and that violence against women still happens in society even by those in authority.

Jorda said the police may have discriminated against women by quickly acting on the version of a male prosecutor as to what really happened.

If there was no clear evidence that the encounter stemmed from an “official function” of the fiscal, but arises from a personal relationship as father of her child, she asked why the police would “accommodate” the prosecutor.