SMB TIES IT UP 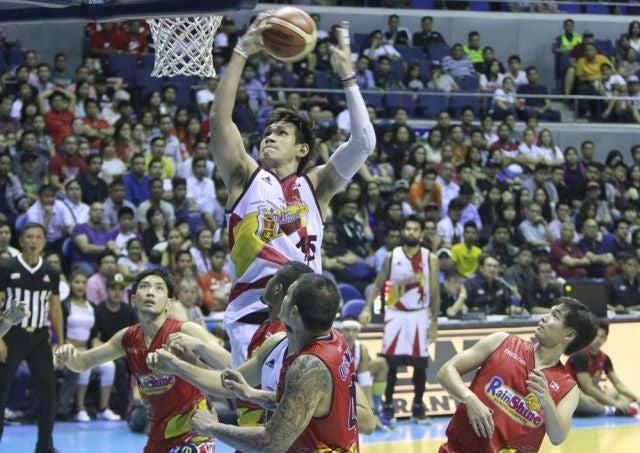 Cebuano big man June Mar Fajardo attempts a shot against the Rain or Shine defense in Game 4 of the PBA Philippine Cup semifinals round. (PBA IMAGES)

The San Miguel Beermen leaned on a huge third-period blitz to beat the Rain or Shine Elasto Painters, 105-92, in Game 4 and tie the best-of-seven semifinals series at 2-2 in the 2016 PBA Philippine Cup last night at the Smart-Araneta Coliseum.

It was another day at the office for Cebuano behemoth June Mar Fajardo, who racked up 33 points, 15 rebounds and six blocked shots.

But it was in the third quarter that Fajardo was at his most lethal, nearly scoring at will, whether it was on his patented fadeaway jumper or on offensive rebounds as the Pinamungahan-native and the league’s reigning MVP continued to be the biggest thorn on the side of the Elasto Painters.

Afterwards, Fajardo credited his head coach Leo Austria for firing up the team during that crucial third quarter stretch.

According to the affable big man, Austria lit into the team and criticized them for their shoddy shot selection.

With Fajardo clicking, the Beermen, likewise, found their groove, scoring 13 unanswered points – part of a white-hot 22-3 run that turned what was a 61-all game into an 84-64 rout.

Wiry forward Arwind Santos also came alive during that telling stretch, burying a couple of three-pointers while Chris Ross was his usual pesky self, frustrating Rain or Shine guard Paul Lee into a horrendous third quarter performance after scoring 10 points in the first half.

Lee, considered to be Rain or Shine’s heart and soul, eventually fouled out later in the third.

Fajardo got plenty of help from four other Beermen who scored in double-figures. Marcio Lassiter torched the nets for 20 points, 16 coming in the first half, where he buried all four of his triples. Santos had 19, Ross chipped in 13 while Cabagnot pitched in 12.

Rookies Maverick Ahanmisi and Don Trollano each had 15 to pace Rain or Shine.