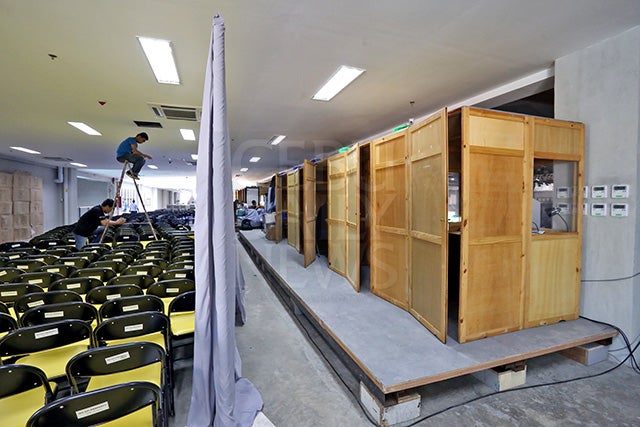 Booths for language experts who will translate the IEC proceedings in ten languages are set up in the IEC Pavilion in Cebu City. (CDN PHOTO/JUNJIE MENDOZA)

She could have used the money to pay her family’s utility bills.

But Julieta Herrera from Quezon City chose to spend her P8,800 for something more important – her spirituality.

“There’s that desire to know more about the Eucharist. That is just so important to me. I wouldn’t mind spending that amount. The bills can wait,” she said.

The 58-year-old mother of two is among the delegates to the 51st International Eucharistic Congress, which will be held in Cebu City from  Jan. 24 to 31, 2016.

Her registration fee and travel expenses are shouldered by the Holy Trinity Parish in Quezon City, where she serves as lector and member of the Legion of Mary.

But Herrera has to pay for her hotel accommodation in Cebu. Although she planned to attend the first four days of the congress due to her work, Herrera could not wait to be part of a historic event.

“I’m really excited. This is once in a lifetime; my first and last. I want to broaden my knowledge about the Eucharist which is the highest form of prayer. A day without attending Mass makes me feel so empty,” said Herrera, an employee of the Supreme Court.

At least 15,000 delegates from all over the world are expected to attend the IEC which takes place every four years to promote an awareness of the central place of the Eucharist in the life and mission of the Catholic Church, draw attention to the social dimension of the sacrament and helps  one understand more about the liturgy.

Cebu Archbishop Jose Palma considers hosting the IEC a blessing from the Lord.

“Early on, I felt so anxious because the city has no venue that can seat all 15,000 delegates. But  look now, Cebu did a miracle,” he said.

The Archdiocese of Cebu didn’t spend a single centavo for the construction of the Pavilion, which sits on a 25,754-square-meter lot behind the archdiocesan seminary in Mabolo, Cebu City.

Under a memorandum of agreement, DDC pledged to donate the entire Pavilion. In exchange, the local church will give DDC usufruct rights over a 2-hectare lot inside the seminary compound for 25 years.

This will be the first time in the history of the IEC that all the sessions will be held in one venue.

As of this week, about 12,000 individuals have registered for the event, including more than a thousand from nearly 60 different countries.

Cebu Auxiliary Bishop Dennis Villarojo, 51st IEC secretary-general, said they are now in the final stage of the preparations with the security arrangement as the main focus.

Since it is a big event, he said Executive Secretary Pacquito Ochoa has adopted the same security template used during the Asia-Pacific Economic Cooperation (APEC) Summit in Manila last November.

Catholics should care about the IEC because it deals with the Eucharist – a sacrament instituted by Jesus Christ before He suffered and died on the cross to save mankind.

“All of these are actually interrelated. They all point to the absence of God in individuals’ lives and in society. The Eucharist brings our consciousness back to the desire of God to become part of human society, to be involved, to be one among us, to be ‘Emmanuel’ (God with us),” he said.

While the Eucharist is openly celebrated in the Philippines, Villarojo said it’s not the case in other countries.

The IEC, he said, will help Catholics realize the value of the Mass and the challenges some people from abroad experience just to celebrate the sacrament.

“We, in the Philippines, have always taken for granted that the Catholic faith is at the center of society. But there are people who will be coming to this congress who can recount experiences of the faith where they are largely marginalized, and this can be a source of inspiration for us,” Villarojo said.

He said they have lined up international speakers who can best explain the mystery of the Eucharist as well as its social dimensions.

“These are world-renowned speakers and many people have been inspired by their testimonies and talks. So this is one rare occasion where we had gathered these speakers in one setting and it may not happen again anywhere in the world,” Villarojo said.

Aside from the talks at the Pavilion, delegates will also experience a bit of Filipino culture through various shows at the parishes and other events apart from the sessions.

“We can show the world the richness of our culture, the faith of our people, and the traditions of the Filipinos. And we can tell them, we have something to share to the world, and likewise as the world comes, we can also learn from them, and be enriched by this encounter of cultures,” Villarojo said.

Sessions at the Eucharistic Pavilion will begin the following day until Jan. 30.

In the afternoon of  Jan. 27, delegates will be relegated to different parishes in the cities of Cebu and Mandaue for dinner and cultural shows.

The following day, after the sessions at the Pavilion, the delegates will visit seven churches in Cebu City for the traditional Visita Iglesia to pay homage to the Blessed Sacrament.

On the same day, about 5,000 young people will gather in Lapu-Lapu for the IEC Youth Day.

On Jan. 29, Friday, a Mass will be celebrated outside the Cebu Capitol and will be followed by a 3.5-km prayer walk that will take the Blessed Sacrament to Plaza Independencia.

The next day, Archbishop Emeritus of Cebu Ricardo Cardinal Vidal will preside over the Mass and administer the first communion of 5,000 kids at the Cebu City Sports Center. After the Mass, different groups will dance the Sinulog in honor of the Sto. Niño.

The last time IEC was held in the Philippines was in 1937 in Manila. Vidal, then 6 years old, was among the first communicants. Vidal is now 84 and is archbishop emeritus of Cebu.

The weeklong event will end on Jan. 31 with the statio orbis or the closing Mass to be presided over by Yangon, Myanmar Archbishop Charles Maung Cardinal Bo at the South Road Properties. Cardinal Bo is the papal legate of the 51st IEC.

Pope Francis is expected to deliver a message in a live satellite feed from Rome during the closing Mass. The Holy Father will also announce the venue for the next IEC in 2020.

Read Next
City Hall to seek ban exemption for BRT