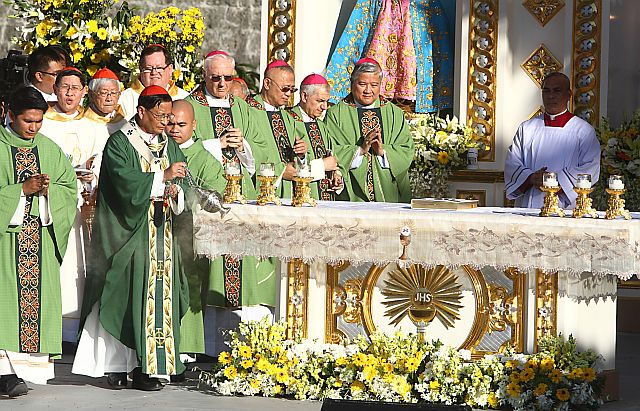 Catherine Unger has been blind since she was 14.

But the 33-year-old special education teacher of Mandaue City, Cebu knew she still can glorify the Lord despite her condition.

With a steady and loud voice, Unger yesterday read the first letter of St. Paul to the Corinthians before a crowd of 350,000 during the opening Mass of the 51st International Eucharistic Congress (IEC) at Plaza Independencia.

She brought with her a Bible written in Braille, a writing system that allows blind people to read by touching raised dots on embossed paper.

“God made me realize that I can do things through Him,” Unger told Cebu Daily News.

In reading God’s word, she said she wants people to know that even those with disabilities can do something for God.

“As I deliver the word of God, I’m representing all blind people. Many think we are only for massage. But I want to prove that blind people, too, can read,” Unger said, while admitting to initially feeling despair and hopelessness when she gradually lost her sight to glaucoma at a young age.

On a hot and humid afternoon, throngs of people, including 12,000 delegates from 72 countries, gathered at Plaza Independencia, a popular place for ecumenical debates and hangouts for local households, to celebrate the Holy Eucharist at the start of the IEC.

Some people came with umbrellas while others wore caps or hats to protect themselves from the blistering heat.

Weather specialist Romeo Aguirre of the state weather bureau Pagasa said the temperature in Cebu was at 29.8 degrees Celsius yesterday.

Several audio speakers and four wide LED screens were all over the plaza where people stood on open ground.

On the altar were a huge crucifix and the images of Sto. Niño de Cebu, Our Lady of Guadalupe and San Pedro Calungsod, the first Visayan saint.

Cardinal Charles Maung Bo of Yangon in Myanmar, the papal legate of the 51st IEC, celebrated the Mass. 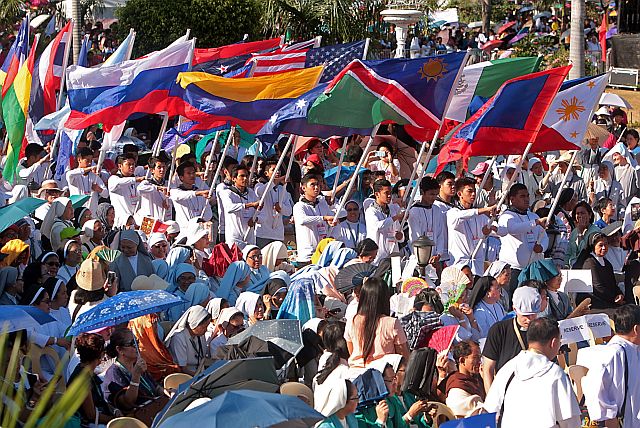 GLOBAL CHURCH. Flags of different nations representing the delegates to the International Eucharistic Congress (IEC) are paraded during the opening Mass at the Plaza Independencia in Cebu City. (CDN PHOTO/TONEE DESPOJO)

At the start of the Eucharistic celebration, Archbishop Piero Marini, the president of the IEC Pontifical Committee, presented to Cebu Archbishop Jose Palma Pope Francis’ gift to Cebu — the “Book of the Gospels.”

The silver-plated book contains accounts of the life, passion, death and resurrection of Jesus as written by the four evangelists: Matthew, Mark, Luke and John.

Bo, the 66-year-old archbishop of Yangon, took note of the afternoon heat.

“Be patient with the heat. The moon in Cebu is too hot,” he said in jest to begin his homily.

Bo said he’s very happy to visit Cebu which he called a “great land of faith.”

“Ang atong Santo Padre gihigugma kamong tanan (Our Holy Father loves all of you in the Philippines). You are a great nation, the biggest Catholic community in Asia. You have promoted the growth of Catholicism in Asia, and your light has shone in every part of the world,” he told the congregation.

The papal legate said Filipinos working abroad have brought Jesus to other nations.

Although often visited by calamities, Bo said Filipinos cling to their faith.

“Time and again you have proved your resilience. Your faith rises above all challenges. May this 51st IEC bring healing to this wounded planet,” he said.

The arrival of Christianity in Cebu almost 500 years ago, he said, carries a “command to be executed, a promise to be repeated and a mission to be fulfilled.”

Bo said the devotion to the Sto. Niño in Cebu and Hesus Nazareno in Manila are good but not enough to manifest the faith and to propagate the Lord’s teachings.

Bo called on the people not to ignore the poor for they are synonymous with the Eucharist.

“The Eucharist and the poor are inseparable. The love of the Eucharist should lead us to love the poor. Today, we gather the rich and the poor, the noble and peasants, aristocrats and commoners, but when we approach the altar, the Eucharist strips you off of all your social (status). The Eucharist is the beacon of human equality,” he said.

Bo also highlighted the hope of the Church to renew the face of the earth through the Eucharist.

“We are journeying through uneasy times. Hatred based on religion and culture is expanding. Being a Christian is such a risk today. ‘Take this cup, this is my blood is not just a Eucharist word. It’s true of the lives of many Christians today,” he said.

“The country where I came from faced war and conflict for the last 16 years. The world is fragmented. Humanity is cloaked in tears and blood today. Christianity offers a new version of humanity through the Holy Eucharist,” he said.

Archbishop Palma, in his welcome remarks, admitted that Filipinos, though religious, still need to deepen their faith.

“There is a dichotomy between worship and life. With utmost humility, we come before our merciful Lord. May the Eucharist move us to become missionaries of mercy in a world wounded by hatred and indifference,” he said.

Before the Mass, the renowned Sandiego Dance Group performed a reenactment of the Christianization of the Philippines.

The IEC theme song “Christ in us, our hope of glory” was then played as flags of different countries were presented on stage. The processional march then followed as a huge bell pealed and clanged.

The liturgical hymns were performed by the six-member Koro de San Agustin from Tuguegarao City.

The Christ the King Youth Symphony Orchestra from Calbayog City led the congregation in singing the liturgical hymns.

The orchestra, which was formed by Archbishop Palma when he served as bishop of Calbayog several years back, performed in Pope Francis’ closing Mass at the Quirino Grandstand in January last year.

They sang the liturgical hymns that were performed at the closing Mass of Pope Francis’ visit during the IEC Mass.

The IEC sessions start today at the Eucharistic Pavilion within the seminary compound in Mabolo, Cebu City.