‘Don’t forget the martyrs in China’ 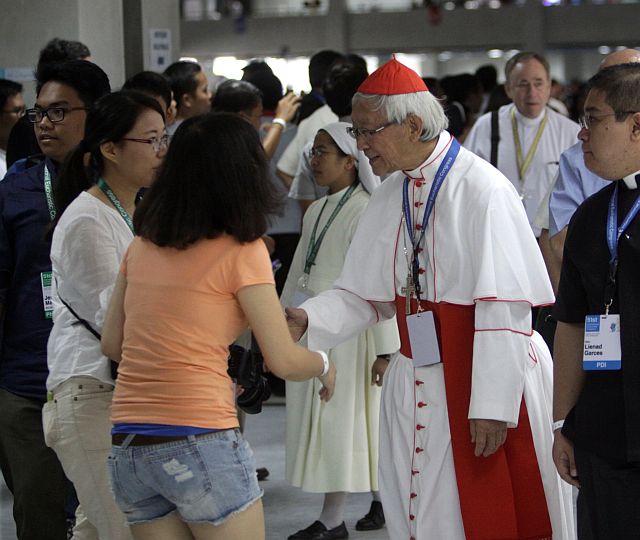 Joseph Cardinal Zen Ze-Kiun of Hong Kong is greeted by Asian delegates at the IEC Pavilion where he gave a testimony about the struggle of Catholics in China. (CDN PHOTO/LITO TECSON)

In this day and age, Catholics in China continue to suffer persecution.

The struggle of Chinese martyrs was the focus of the remarkable testimony of Joseph Cardinal Zen Ze-kiun of Hongkong in the first day of plenary sessions of the 51st International Eucharistic Congress in Cebu City.

Speaking to an audience of at least 15,000 people at the IEC Pavilion, the retired prelate said the seeds of Christianity sown in China continue to grow even if authorities want to put an end to religion.

“Somebody said that all these (persecution) belong to history. So they say let us look to the future. Is it so? Don’t forget to pray for Catholics in China. They are still in deep waters and in burning fire,” Zen said.

Main religions in China include Confucianism, Taoism, and Buddhism but under Communist rule, all religious worship has largely been suppressed.

Amid continuing threats, he said, Catholics continue to keep their faith alive.

“By offering their own lives, they proclaim that they believe in Him as their redeemer, the One who died on the cross and who introduced us into an abundant life, a life of love and glory,” he said.

Zen entered the Salesian Order when he was 16 years old. He was sent to Hongkong for his novitiate.

Then the communist party rose to power in 1948 and the Church “became silent”.

He recalled that the “atheist regime” controlled the education system and organized debate sessions where students would criticize their teachers, the priests and the missionaries.

In 1951, heads of local Catholic schools were called to a meeting to denounce foreign missionaries and declare the papal nuncio in China as imperialist.

When the assembly was asked to raise their hands in approval of the government’s plan, he said a young priest stood up and calmly said: “No. It is not allowed to declare ourselves against the Pope, against the successor of St. Peter, against someone who represents Jesus in our church.”

“The whole assembly was shocked, but also awakened up. So that lonely voice caused a shock,” Zen, now 67, said.

The priest, he said, disappeared that day.

Zen gave the testimony after Bishop Miguel Cabrejos Vidarte of Peru shared his reflections on the 51st IEC Theme: “Christ in you, our hope of glory,” a text from the letter of St. Paul to the Colossians.

His testimony strikes a chord in Cebu, where the Chinese community have their own parish. The church-shrine in D. Jakosalem Street is the center of Sacred Heart Parish, a Jesuit-administered Roman Catholic personal parish for the Chinese-Filipino Community of Cebu.

It was founded in 1952 and was originally dedicated to Our Lady Queen of China.

The struggle of Christians in China continues today, said Zen.

He said two months ago, a 40-year-old priest, who studied abroad, went back to mainland China and worked with zeal, formed the local clergy, and helped the poor.

The priest was later found dead, floating in the river.

After two months, authorities said the priest may have committed suicide.

“Now, you must know that it’s common knowledge in Hong Kong, there are people who kill themselves, but there are also those who are being made a suicide,” he said.

In Sept. 8, 1955, feast of the birth of Mary, almost a thousand Catholics were arrested and brought to public trial, accused of various crimes.

One bishop, Zen recounted, was pushed before the microphone to confess his sins. But the bishop, with hands bound, instead shouted “Long live Christ the King!”

In another instance, young members of the Legion of Mary were told to present themselves to the police and declare themselves members of a reactionary organization.

“Everybody knew the consequences if they refused to comply. Imagine how terrified were the parents of these boys and girls,” he said.

Some parents urged the children to say a lie and to renounce the Catholic faith.

But the young people, Zen said, with tears asked their elders, “How can we betray Jesus? He deserves our loyalty.”

“By hundreds, they went into prison. These teenagers, and some fortunate ones among them could come out later, when they were 40. They offered to Jesus the best years of their life,” Zen said.

But hope means complete trust even if one does not expect to be saved in this life.

“We believe in the community of saints. We believe that after the cross, there is resurrection. After the tribulations come glory,” Zen said.

Read Next
Rains seen to cool Cebu until Wednesday this week