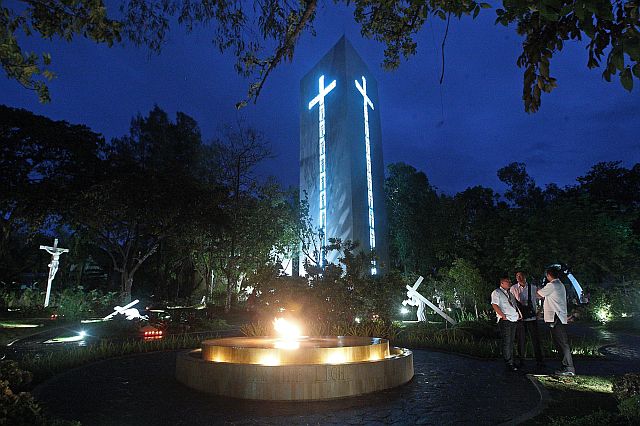 OASIS. The Eukaristiya Garden of Thanksgiving with life-size figures of Jesus Christ’ in his last days and a 40-meter-high Cross Tower rises in the Cebu archbishop’s compound. The new landmark was blessed by Charles Maung Cardinal Bo, the pope’s representative in the 51st International Eucharistic Congress. (CDN PHOTO/TONEE DESPOJO)

15,000 delegates under one roof marks a first for Cebu, IEC history

Organizers worried about traffic jams, security threats and the logistics of handling an unprecedented crowd of 15,000 local and international guests in Cebu City.

But the first plenary session of the 51st International Eucharistic Congress (IEC) yesterday saw this number of delegates sitting under one roof, united in worship, with only “minor” glitches.

Complaints about the hot weather, missing IDs and weak spots in the sound system were raised by several delegates.

But traffic near the IEC Pavilion in Mabolo, Cebu City was “manageable”, despite fears that 100 tourist buses for delegates would clog the area, according to Jonathan Tumulak of the Cebu City Transportation Office.

The IEC, last held in the Philippines 79 years ago, was not an ordinary conference, he said.

“We believe in the grace of the event,” said Palma in yesterday’s news conference at the Pavilion’s International Media Center.

He said the main focus of the IEC was the Eucharist itself as the actual presence of Jesus Christ.

“Our visitors are happy with what they observed. We have implemented what we prepared and they exceeded our expectations. Overall I can only thank the Lord,” he said.

The Pavilion, built for the 51stIEC, is the first facility in Cebu to accommodate 15,000 sitting delegates, a capacity that the tourism industry has long aspired to develop.

It is also the first time in the history of the IEC that the plenary session of this major gathering of the Roman Catholic Church is held under one roof instead of spreading out delegates in different smaller venues.

About 12,000 delegates from 72 countries were registered, with more walk-ins still trying to sign up yesterday.

Palma said they also had 5,000 volunteers at hand.

“The delegates are very participative, and the presence of the bishops from different parts of the world is inspiring,” Palma said.

Starting 5 a.m. half the length of Pope John Paul II Avenue was closed to traffic, except IEC buses and vehicles with car passes.

Despite the road closure in one of the busiest interesections of Cebu City, traffic was moving.

“I passed by Pope John Paul Avenue earlier today (Monday) There were a lot of vehicles but the traffic would only last for slightly more than a minute,” CCTO operations chief Joy Tumulak said.

Msgr. Joseph Tan, spokesman of the Cebu Archdiocese, said they received complaints from delegates who could barely hear the speeches and the music from the stage at the IEC Pavilion.

“The number one problem we received was about some technical aspects. In some areas in the Pavilion the sound couldn’t be heard clearly,” he told Cebu Daily News.

A similar concern was raised about the opening Mass at Plaza Independencia last Sunday.

People on the streets around the park couldn’t clearly hear the Mass proceedings.

Tan said organizers are trying to address this before the next large outdoor Mass on Friday at the Capitol and the Statio Orbis closing Mass on Sunday.

“There were those who felt weak due to the very hot weather last Sunday,” he said.

However, the air-conditioning in the Pavilion compensated for the heat with very strong cooling.

A sudden downpour after 2 p.m. caught delegates by surprise. They were able to use the raincoats distributed in their conference kits. But the rain prompted most to stay in the Pavilion instead of going to the Waterfront Hotel for the concurrent sessions in the afternoon.

Tan considered the problems encountered during the first two days of the IEC “minor.”

Lunch packs were served in tented areas around the seminary compound where the Pavilion is located. Delegates ate in tables spread under tents or ate alfresco under the trees or open sky. 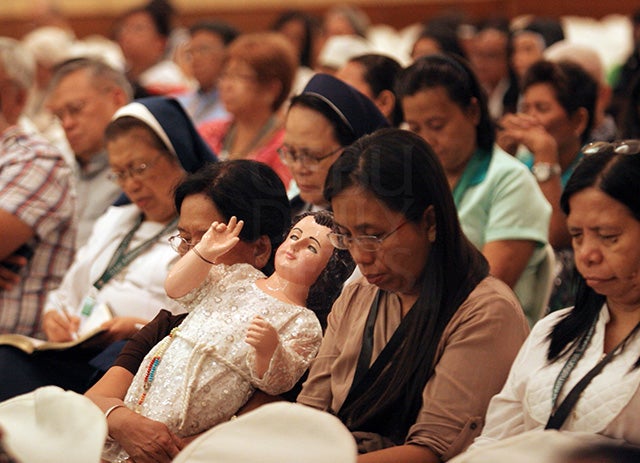 IEC delegates in silent reflection during a conference session in Waterfront Hotel in Lahug. One pilgrim brings her image of Sto. Nino along. (CDN PHOTO/JUNJIE MENDOZA)

Meal tickets gave them a choice of food: pork, beef, or fish with mixed vegetables, dessert and a bottle of water.

Barbecue stations and food stalls were also available for those who wanted to order additional dishes.

Organizers were happy that activities of the first two days unfolded without any major security incident.

All persons entering the Pavilion had their bags checked through an X-ray scanner. All delegates, including the bishops, had to wear individual security bracelets to ensure access to the event sites.

“When police officers gave instructions, the crowd listened. They also followed our safety marshals when we instructed them to clear some areas for the fireworks (on Sunday),” he said.

He said they recorded only three cases of fainting in Sunday’s opening IEC Mass at the Plaza Independencia.

“There was no major incident thanks to the efforts of all concerned sectors including the public,” Gaerlan said.

“We will continue to protect the delegates and their routes, though the events (yesterday) are held inside the pavilion. We do not want to take anything for granted as far as security and safety is concerned,” he said.

Gaerlan said police officers are ready to accompany IEC delegates outside the venue.

Today, another set of speakers will address the delegates at the Pavilion.

Tumulak said despite the congestion of vehicles in Pope John Paul Ave., traffic was moving and there were no reports of vehicles stuck on the road.

“Companies near the pavilion should adjust their time-in and out so that they will not converge in the area when they leave the office to avoid congesting traffic,” he said.

He said Pope John Paul Avenue was closed as early as 5 a.m. and opened at 10:10 a.m. when the last bus transporting the delegates entered the Pavilion.

Most jeepney drivers managed to adjust to the rerouting while others were assisted by traffic enforcers stationed throughout the arterial roads.

The suspension of classes in Catholic schools and some public schools also helped ease the traffic.

The whole stretch of Pope John Paul II avenue where the pavilion is located nearby is closed to all public and private vehicles from 5 am to 9 am and 2 pm to 7 pm for the duration of the IEC.

‘Don’t forget the martyrs in China’