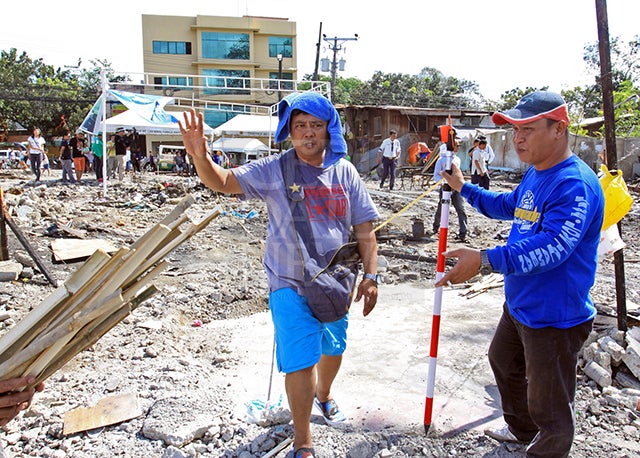 An engineering team from Cebu City Hall surveyed the site in sitio Avocado, barangay Lahug as part of a reblocking plan in this January 3, 2016 file photo. (CDN PHOTO/LITO TECSON)

THE settlers of sitio Avocado, barangay Lahug recently filed a motion to dismiss the case of forcible entry filed against them by the University of the Philippines Cebu.

In their motion filed by their lawyers Floro Casas Jr. and Mikel F. Rama, the settlers claimed that UP Cebu has no grounds to file a forcible entry case due to lack of evidence that they had ‘prior physical possession’ of the lot they’ve occupied for years now.

“What the complaint and its annexes allege instead is that the plaintiff wants to recover a parcel of land based on claim of ownership,” the motion reads.

The university produced Transfer Certificate Title (TCT) no. 31166 which they said confirmed that they are the owners of Lot 911 B-2-C-2-E, which includes the 4,000-sqm. sitio Avocado fire site.

The settlers said they were the original occupants of the lot before they were displaced by the fire that hit the area last Dec. 26.

The university planned to construct a P65-million high school building on the fire site in 2013, but were prevented from doing so due to the presence of the settlers.

Three days after the Dec. 26 fire, UP Cebu officials visited the settlers who were then transferred to the Lahug Elementary School gym and discussed their planned school building project.

Last Dec. 31, UP Cebu personnel put up a tent on the fire site and displayed tarpaulins indicating the site of the proposed building.

The settlers contended that one tent and some tarpaulins cannot be considered as evidence of prior possession over a 4,000-square meter lot.

UP Cebu’s lawyer Rene Abcede said they have the land title to back their claim.

He said security personnel, barangay tanods and the building contractor authorized by UP Cebu Dean Liza Corro took possession by marking out the fire site with bamboo stakes for the building project site.

Abcede said the settlers and City Hall staff removed the markers and prevented the university from installing an additional tent.