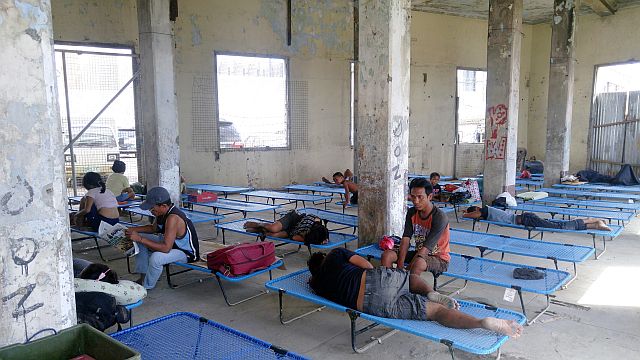 HOME FOR NOW. The 56 street dwellers sleep on stretcher beds provided by the Cebu city government at the Compaña Maritima building following the closure of the Devotee City. (CDN PHOTO/JULI ANN SIBI)

SOME 56 street families  staying at the Devotee City were asked to return to the flood-prone and abandoned Compania Maritima building.

“Our agreement with 2GO, which provided the container vans for the Devotee City, was that they were going to be used only by the IEC delegates,” said Meriam Cabaluna, administrative officer of the Devotee City.

Cabaluna said the Devotee City was supposed to close at the end of the Sinulog celebration, but it was extended to accommodate IEC pilgrims and the 56 street families who were rounded up by the Cebu city government before the IEC.

The street families have remained optimistic, saying the move back to the Compania Maritima building is an opportunity for a new life.

DSWS chief Ester Concha said they remain in contact with social workers of the provinces where these families live to ensure that they are enrolled in their livelihood programs.

The Cebu city government is still working on the P4-million temporary shelter in Barangay Lorega which can house over 200 families.

“The shelter can serve as a temporary place for them to stay while they get their lives back on the go. That way, when they are settled, they can start finding ways to build their own homes,” Concha said.