No relocation site for victims 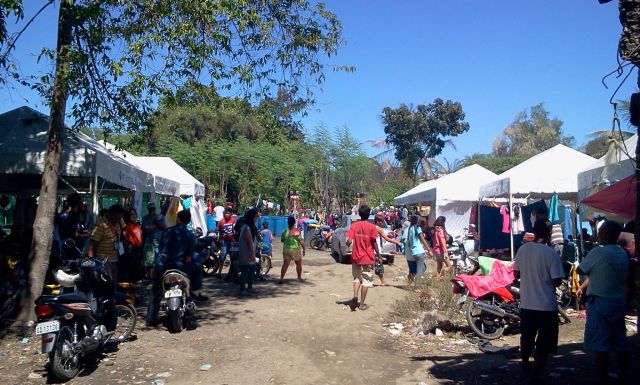 The Mandaue City government will soon remove the tents provided to the fire victims in Barangay Ibabao-Estancia. Those who will not leave the site will have to move to the gym or make their own shelter in the privately owned lot. (CDNPHOTO/NORMANMENDOZA)

Fire victims in Sitio Nangka, Barangay Ibabao-Estancia in Mandaue City who refuse to move to the gym will have to provide their own shelter.

Felix Suico, Mandaue City Disaster Risk Reduction Management Council head, said they will soon remove the tents that they have provided to the victims.

The city government can’t provide a relocation area because the fire site is privately owned.

Lot owner Dr. Bernadette Amigo-Batiller had notified the settlers that they would have to move out by May.

As of yesterday, Suico said some families have  refused to vacate the 3,000-square-meter lot.

“If they won’t vacate, we will be forced to get the tent that the local government has provided them,” Suico said.

Based on the list obtained from the barangay hall, those who have moved to the gym included 29 house owners, eight renters and nine sharers. Some families have relocated on their own.

Among those who moved to the gym were Narcisa Arcenal  and  Ramona Sinoy, who had received P25,000 each from the lot owner.

Arcenal said they were hesitant to leave but since they were offered financial assistance, they decided to vacate the fire scene and temporarily stay in the gym. They will eventually move in with a cousin in Barangay Mantuyong.

Sinoy, a street sweeper, said she has no relatives in Mandaue City and has nowhere else to go.

CDN found out that the 66 house owners were renting the lot of the Batillers for P200 per month.

The property is reportedly to be sold to a food processing company.

Some non-government organizations yesterday distributed mats, pails, kitchen utensils and housewares as well as 20 kilos of rice to the fire victims.