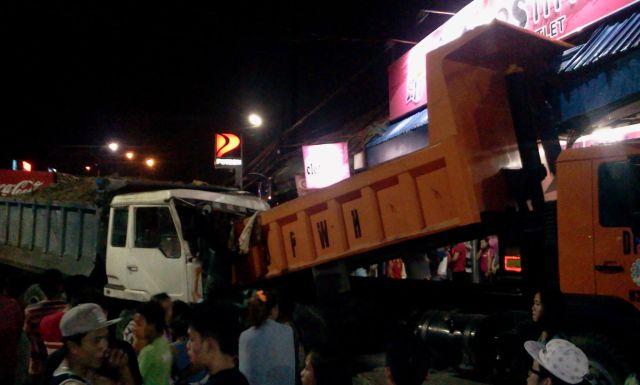 A vehicular accident at the Lapu-Lapu City side of Marcelo Fernan Bridge on Wednesday night kills one and leaves five other injured. (CDN PHOTO/NORMAN V. MENDOZA)

THE Department of Public Works and Highways (DPWH) in Cebu  has put more lights and warning signs along its road maintenance project site at the foot of the Lapu-Lapu City side of the Marcelo Fernan Bridge in the wake of the accident on Wednesday night that claimed the life of a DPWH driver and injured five others.

Chuck Lopez, head of DPWH-Cebu sixth engineering district, said the work site was already well lighted and has warning signs and  barricades, but they would make the area brighter to prevent a repeat of the incident.

DPWH workers were patching holes in the viaduct of ML Quezon Street in Barangay Pusok, Lapu-Lapu City shortly before 8 p.m. when a truck loaded with diorite (black stones) lost its break, descended the bridge at high speed and hit a lamppost before it plowed into a DPWH-owned multicab and then rammed a dump truck filled with asphalt, also owned by DPWH, that were parked along the work site.

Four of the injured — all job order employees of DPWH — were unloading the asphalt when they were hit. The four — Marlon Katam-isan, Raymundo Peñaranda, Joselito Cruz and Robincio Tugap — were confined at the Vicente Sotto Memorial Medical Center in  Cebu City.

Estrada, even if he remained confined at Chong Hua Hospital in Cebu City, would be charged with reckless imprudence resulting to homicide, multiple physical injuries and damage to properties, said Pino.