THE Environmental Management Bureau in Central Visayas (EMB-7) yesterday issued a notice of violation on the owner of the coal stockpile in a private lot in San Fernando for failing to secure an environmental compliance certificate (ECC).

In his order, Cuñado cited Sec. 4 of Presidential Decree 1586, or an Act Establishing An Environmental Impact Statement System, which provides that an environmentally critical project needs to secure an ECC.

The order said the regional EMB director can issue a cease and desist order to “prevent grave or irreparable damage to the environment.” 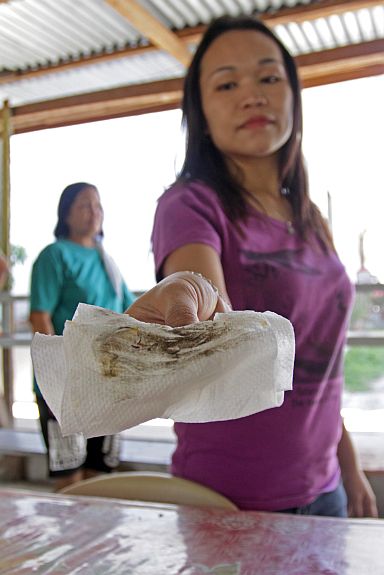 A resident shows a tissue paper smeared with coal dust after she used it to wipe a table in Sitio Lacaron, Barangay Pitalo in San Fernando town. (CDN PHOTO/LITO TECSON)

The caretaker, who identified himself only as Armen, said Anseca Development Corp. (ADC) is not the owner of the lot as stated in the investigation report of EMB-7.

Armen named Mega Assets Inc., a real estate lessor, as the owner who leased the lot to them.

Armen said they had a verbal agreement with San Fernando Mayor Antonio Canoy to remove the coal stockpile by March 20.

Armen said the residents who complained about the pollution caused by the coal should not worry since the coal will be removed soon.

The coal was supposed to be delivered last year to Bataan but due to weather disturbance and fears that the barge carrying the coal might sink, they decided to temporarily store the coal there.

He said they promised to attend the March 10 technical conference called by the agency to explain their side on the case.

Armen said there are 1,000 tons of coal left and it would take 50 to 60 truck loads to completely clear the coal out of the lot.

“Naningkamot mi nga tangtangon na (We are doing our best to remove it),” he said.

Read Next
Repairs on Mandaue line finished by April 15