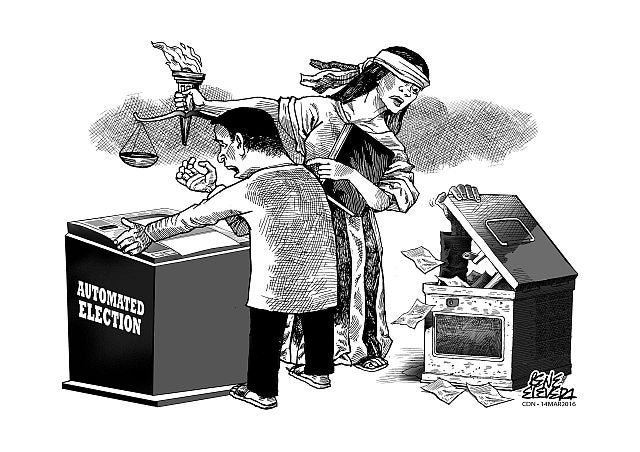 The Supreme Court order on the Commission on Elections to issue voters receipts from their automated vote-counting machines or precinct count optical scanners (PCOS) could not have come at a worse time with a month and weeks to go before the elections.

The order was in response to a petition filed by independent senatorial candidate Richard Gordon, who reiterated that the issuance of receipts would ensure transparency in the voting process.

But as explained by Comelec Chairman Andres Bautista, the PCOS machines  indicate to voters if their ballots have been accepted and counted through their screens.

Apparently that wasn’t enough for Gordon, and the Supreme Court found merit in the former senator’s petition to issue that order despite the fact that it would mean, among other things, reformatting the SD cards that originally were programmed to issue voters receipts.

Why the Comelec dropped that option in favor of showing votes only on the screen, we may never know. But it would have been useful, and considering Bautista’s proclamation that they were covering all the bases, it would have been an effective failsafe or fallback in the event the Supreme Court rules in favor of issuing voters receipts, which it eventually did.

But that time has passed and the Comelec said it may either resort to manual vote counting — a situation favored by local politicians who can summon their goons and resources to manipulate votes and harass board of election inspectors (BEIs) — or postpone the elections before the June 30 proclamation of new or reelected officials.

Despite the argument that issuance of voters receipts won’t encourage vote-buying owing to the requirement that voters should dispose of said receipts after leaving the precincts, it is no guarantee that these won’t be used as physical evidence  by voters who sold their votes to politicians.

That said, it is up to the Supreme Court to rule immediately on the Comelec’s motion for reconsideration. It’s too late to blame Comelec for failing to cover all the bases, but the High Court should now act fast.

Chief Justice Maria Lourdes Sereno is right: the poll agency should avoid raising these doomsday scenarios of postponed elections or manual vote counting to the public and focus instead on arguing their case before the High Tribunal.

At the same time, we hope the Supreme Court also acts with dispatch and come out with a decision that won’t compromise the Comelec’s capability to hold credible, transparent and honest elections.

Read Next
The evolving story of Tañon Strait