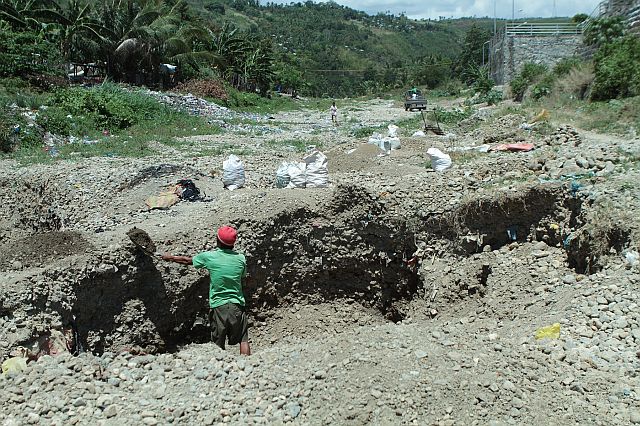 Raul Caneda shovels gravel to the side of the Mananga River which he will later sell to quarry firms. Most of the quarrying is done by residents, local officials said. (CDN PHOTO/FERDINAND EDRALIN)

ABOUT 200 residents living along or near the Mananga River in Talisay City are in danger of losing their lives and homes to flash floods if illegal quarrying in the area continues unabated.

Julius Regner, Provincial Disaster Risk Reduction and Management Office (PDRRMO) spokesman, voiced alarm over the worsening quarry operations in the area as the river dried up due to the El Niño phenomenon.

“We will still have to check the issue. We will send a team to conduct a risk assessment on the area, then we will come up with steps to take,” he said.

With the rainy season expected in June, Regner said the denuded river banks will allow water to overflow easily, spreading to nearby residential areas.

He said their office still cannot tell the extent of damage in case a flash flood occurs until they conduct a risk assessment on the area.

Talisay City residents are now able to extract more sand and gravel from the river while there’s no water, with some even digging quarries as deep as 12 feet.

“Once the water returns, there is a big possibility that the soil around the quarries will collapse,” Regner said.

Water in the river is usually chest-deep to an average adult, but small children can now run around the area lately.

Talisay City Mayor Johnny de los Reyes, however, said he hasn’t seen a flash flood in Mananga for “many years.”

He said there isn’t much water in the river to start with because it is already contained within the Jaclupan Dam of the Metropolitan Cebu Water District, which supplies water to consumers from Talisay City to Barangay Carreta, Cebu City.

De los Reyes said there are about 50 households, mostly shanties, along the river.

The Lagtang Public Market is located exactly next to the river, but is raised 10 meters from the river bank.

Its parking area for tricycles was reclaimed from the body of water. In a previous report, residents recalled that the river almost destroyed the Mananga Bridge during typhoon Ruping in the early 1990s.

In 2011, continuous rains resulted to the immediate rise of water from the river base, spilling over to nearby shanties lining the river bank.

During the devastation of Supertyphoon Yolanda in 2013, hundreds of residents evacuated to the nearest cultural center when the river’s murky water rose to more than four feet.

While he thinks it is unlikely that a flash flood will occur soon, De los Reyes said he is alarmed by the worsening quarrying operations in the river.

Under an agreement with the Capitol, the Talisay City government is deputized to police the illegal extraction of sand and gravel in the area.