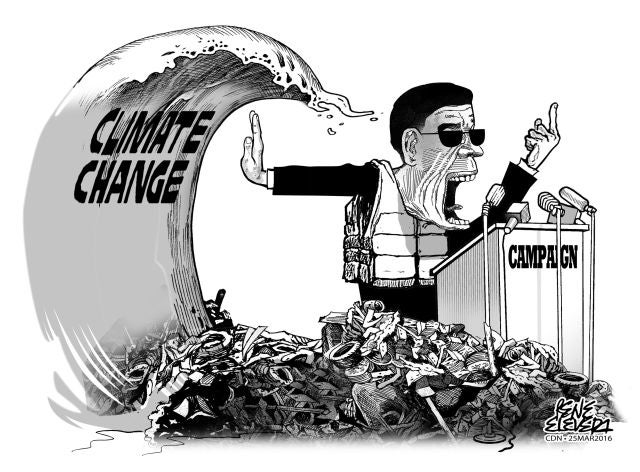 Amid the potshots and verbal tirades he unloaded at administration standard-bearer Mar Roxas, Davao City Mayor Rodrigo Duterte articulated one obvious, yet still valid point, when asked to explain his stand on climate change.

The mayor, who’s known more for his rep as a crime buster, pointed out the reality that it was the First World nations and not Third World countries which are largely to blame for climate change and the crazy weather changes that have occurred in the past few years.

Duterte was right when he said that former US presidential candidate Al Gore is better off lobbying his environmental advocacy in the US, though Duterte may be ignorant of the fact that Gore has been crisscrossing the country to raise awareness of climate change as told in his book and documentary film “An Inconvenient Truth.”

But again the mayor is right, though his response is admittedly colored more by his left of center perspective than anything else. It’s not just the US though, of which he is a vocal critic, but the rest of the First World countries including China which ranks next to the US in terms of having the most number of cars used around the world.

Gore’s recent visit to the country dovetailed with his plans to set up climate change advocates or “eco-warriors” who will campaign to raise awareness of, and promote programs on, environmental protection.

But it’s not just Duterte who chimed in his answer to the country’s climate change problems during the March 20 PiliPinas presidential debate in UP Cebu. Sen. Grace Poe also said the country needs more disaster resiliency programs to better prepare the Filipinos in dealing with typhoons and dry spells caused by the unpredictable weather.

Though Roxas pointed out that disaster resiliency and mitigation are different from ecological protection and sustainable development, his chief sponsor, President Benigno Aquino III, has been quite supportive of coal plant projects which are among the leading causes of pollution in the world.

Though the presidential candidates were vocal and at times articulated well how important sustainable environmental programs and policies are in stopping climate change, they failed to elaborate on how they would achieve or fully realize this objective.

The time constraints may have prevented them from elaborating on their visions beyond motherhood statements, or they may be withholding their agenda for fear of being copied — Duterte is fond of accusing Roxas or other candidates of copying from his so-called playbook even if he has yet to elaborate on even one single iota of his ideas on achieving his programs.

Still, these time and space constraints shouldn’t discourage voters from demanding for answers from these candidates without having to act impertinent or rude.