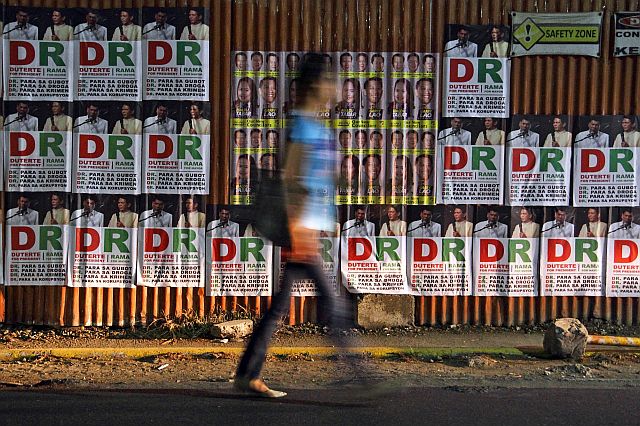 Posters showing pictures of presidential aspirant, Davao Mayor Rodrigo Duterte and Cebu City Mayor Michael Rama side by side were posted all over the city yesterday. The slogans below the pictures seem derogatory but could also be interpreted in a positive way. Sought for comment, Rama said he has ordered them taken down, saying “I asked PROBE to (take them down) because it can’t speak very well and it is unfair to (Vice President Jejomar) Binay.” The mayor said somebody informed him of the posters so that taking them down is the “best thing to do, ASAP”.(CDN PHOTO/TONEE DESPOJO)

Mayor Osmeña confirmed that Binay would visit Toledo City today as part of his campaign sortie in vote-rich Cebu province. Binay is expected to arrive at 12:30 p.m.

He told CEBU DAILY NEWS that Binay is scheduled to join them in their public rally at 3 p.m. but emphasized that there was no arrangement that he would formally endorse Binay there.

“Wala mi gisabotan ana (We don’t have any agreement about that),” he told CDN.

Even UNA regional coordinator, Cebu City Mayor Michael Rama, was unsure of  an endorsement for Binay by Osmeña.

“I wish and am thinking,” Rama answered when asked if he expected Osmeña to endorse Binay’s presidential bid.

Binay lost his biggest political ally in Cebu when One Cebu led by gubernatorial aspirant Winston Garcia broke its alliance with UNA on March 19 but formally announced the breakup on Monday, March 21. Since then, Binay had been trying to win Garcia back, but the latter rebuffed Binay’s reconciliation efforts.

One Cebu has not yet officially decided who among the presidential aspirants they will back or if they will declare a “free zone”.

Meanwhile, Rama claimed Osmeña has been a member of UNA for the last two years. Osmeña’s Certificate of Candidacy, however, shows that he is running for reelection as an independent candidate.

His  candidates for the city council seats are mostly running as independent candidates. They call themselves Team Alagad.

“I admire Mayor Sonny because he has been with us (UNA) and he did not change his heart,” Rama told CDN.

Asked what their move would be should there be no endorsement for Binay from Mayor Osmeña today, Rama answered, “Just cross the bridge and come back to me for a reaction.”

Rama said he will not be joining Binay in Toledo as he would be attending rallies in Cebu City.

Mayor Osmeña said today’s rally in Toledo City will be similar to other political rallies. Candidates wil be speaking to the participants/attendees.

Gwen is still a member of  Binay’s UNA and has been endorsing his presidential bid, while Binghay and Corominas are running under Team Alagad.