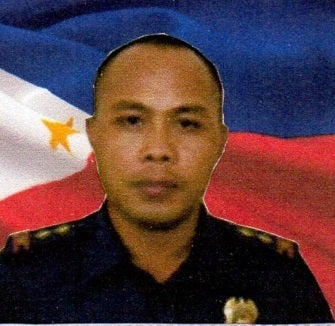 The chief of police in Poro, Camotes Islands was killed in an ambush at 4:45 p.m. on Monday.

Gairanod said Tahanlangit was brought to Ricardo Maningo Memorial Hospital in San Francisco town, but doctors there pronounced him dead on arrival.

His two passengers Rene James Sampan, 16, who is the Barangay Sta. Cruz captain’s son; and Teresa Ann Montalban, 19, were also wounded in the attack.

Sampan,  who was seated in the front seat, was hit in the back, while Montalban, who was in the back seat, was wounded in the right arm.

The two teenagers, who are in stable condition, are confined at the hospital.

Based on the initial report from San Francisco Police Station, Gairanod said, Tahanlangit came from mainland Cebu and boarded a vessel in Danao City, which arrived in the port of Consuelo, San Francisco, Camotes Islands at 4:30 p.m.

Tahanlangit then drove his black Toyota Hilux pick-up, which he  also brought from mainland Cebu, from the port to the town of Poro.

But around a kilometer from the port, he was shot by two armed men who were riding a motorcycle and were probably tailing him.

“Among duda, kasakay ra sab to niya sa barko ang duha unya gisundan siya (We believe that the assailants were on the same boat with him and followed him when he disembarked),” Gairanod said.

According to Gairanod, Tahanlangit was first hit in the left shoulder, so he was forced to stop. The backrider then disembarked from the motorcycle, opened the door of the passenger side of Tahanlangit’s vehicle  and shot him in the neck.

At least five empty shells from a .45 caliber pistol were recovered from the crime scene.

The gunmen were reportedly young, between 17 and 25 years old.

Gairanod said the suspects were also probably wearing wigs as they were seen having long hair.

There was an ongoing hot pursuit operation as of last night, Gairanod said.

From there, he became the deputy police chief of Cordova town, and he moved on to become the Poro Police chief.

Meanwhile, Gairanod said they were looking at two motives in the case but he refused to elaborate.

Gairanod said teams from the Provincial Intelligence Branch of the Cebu Provincial Police Office have been sent in to help in the police operation.

“I didn’t hear about any threats before. I also didn’t know that he had enemies,” he said.

Rama, who said that he last saw the officer a month ago, called for a swift investigation on the matter.

He also assured that the municipal govrnment will extend financial assistance to the slain police chief’s family.

The mayor also reminded police officers in his town to stay vigilant especially that election season is upon them.

Read Next
Bridge board wants DPWH to defer projects