A call to conscience 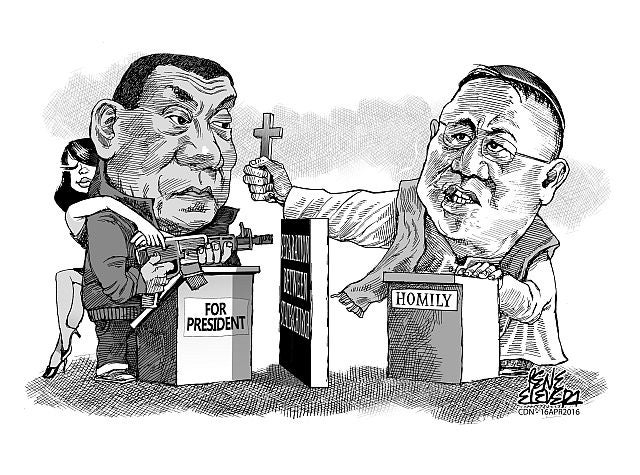 A Redemptorist priest’s call for the faithful to examine their conscience if they choose to vote for candidates who have been shown not to respect life came days before the results of the Social Weather Station (SWS) and Pulse Asia surveys showing Davao City Mayor Rodrigo Duterte claiming a decisive five-point lead over erstwhile survey leader Sen. Grace Poe.

But Fr. Crispin Mostajo’s call wasn’t a lone voice in the wilderness as both Cebu Archbishop Jose Palma and his predecessor Cebu Archbishop emeritus Ricardo Cardinal Vidal shared his sentiment, though not explicitly calling on the people not to vote for Duterte.

In making the call to conscience, Fr. Mostajo also clarified that he won’t be denying the faithful the rite of communion. Still, the message is clear: candidates who vow to eradicate crime through killings have no place in the hearts and minds of those who consider themselves Catholics.

It’s not unusual for Catholic Church leaders to be vocal about their sentiments on candidates short of naming them outright. After all, even if they are prohibited by their own policies to rally support for specific candidates they can make their voices heard over their congregations some other way.

And it’s not as if they are alone in this growing anxiety over a Duterte presidency. Along with his resurgence in popularity went stirrings of uncertainty over how the Davao City mayor’s administration would be like if he and Sen. Bongbong Marcos were to win as president and vice president, respectively.

Both men are associated with strong-fisted, iron-clad rule: Duterte with his history of links with unresolved vigilante killings; and Marcos with his family’s legacy of martial law, corruption and unresolved disappearances of activists and the assassination of the late senator Benigno “Ninoy” Aquino.

For now, Cebuano Catholic leaders are vocal about Duterte whose steadily growing power base in Cebu has appeared to have eclipsed whatever support for Liberal Party (LP) standard bearer Mar Roxas and Sen. Grace Poe has going to the May 9 elections.

And that’s not because of a tall guarantee of one million votes promised by One Cebu standard bearer Winston Garcia, a promise even Duterte considered as a “tall order.”

Will Cebuanos heed the call and do an about face or will they let survey results and a smartly crafted social media campaign engineered by Duterte’s camp – who claim to be driven by volunteers but have so far been silent about their other backers that reportedly involve highly placed but discredited politicians – influence them?

Whether the joint call of Palma, Vidal and Fr. Mostajo have any bearing on the choices of candidates by Cebuanos and the rest of the Filipinos will be determined on Election Day.