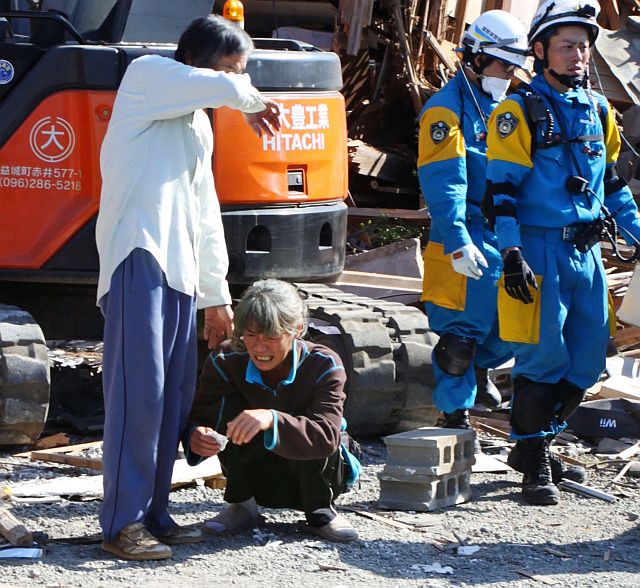 Parents cry after they confirmed that their daughter was found dead after an earthquake in Mashiki, Kumamoto prefecture. (AP)

Some 100,000 evacuees, some sleeping outdoors or in their cars, endured chilly weather and another large aftershock overnight that hit the southern island of Kyushu, near the city of Kumamoto.

Several soldiers carried the body down on a plastic tray covered with an olive-green tarp. Dozens of rescue workers continued to dig through the site where a mudslide is believed to have buried several people.

Two other bodies were found late Monday. At least one appeared to be among the nine reported missing near the town of Minamiaso, according to Japanese media reports. The official death toll stood at 44, awaiting confirmation of the latest death.

After daybreak, Japanese broadcaster NHK showed people squatting at the curbside outside an evacuation center to brush their teeth with water from a green garden hose. The temperature was forecast to rise to 23 degrees Celsius during the day, but fall to 8 degrees Tuesday night.

Food and water shortages are plaguing the recovery effort, even as the search for the missing goes on in Minamiaso. US airlifts delivered water, bread, ready-to-eat food and other emergency supplies to the remote area of southern Japan stricken by the two powerful earthquakes.