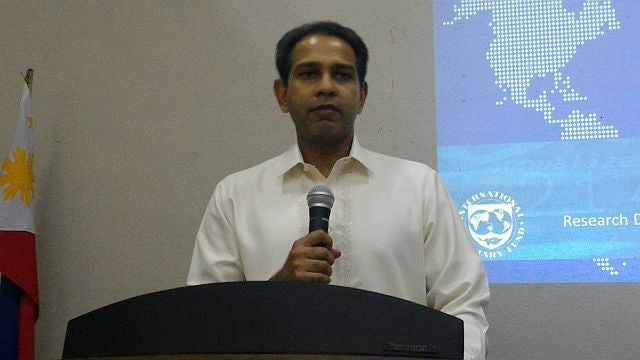 The country is projected to grow by 6 percent this year, which Peiris described as “solid” although this is much slower than Vietnam’s, and by 6.2 percent next year.

Asked by a supporter of presidential candidate Rodrigo Duterte to comment on the candidate’s challenge to US and Australia to cut off ties with the Philippines, Peiris said these are political statements but in reality, “very few countries have taken such extreme steps.”

“Integration into the global economy is very important. With globalization and technology change, it (integration) becomes more important,” he added.

While he declined to endorse any presidential candidate, Peiris said votes should go to whoever would be willing to spend more for infrastructure and continue to participate in the global supply chain.

Peiris pushed for measures to keep debt at a manageable level while broadening the tax base by reducing the loopholes in the tax collection system to enable the government to raise more revenues for infrastructure spending.

He said the country’s tax-to-GDP (gross domestic product) ratio is low at around 15 percent and should be raised to about 18 percent to enable the government to increase infrastructure spending and eventually attract more foreign direct investments.
IMF also cut its growth projections for the global economy to 3.2 percent for this year and 3.5 percent next year.

Japan is expected to go into recession next year because of a high debt level while China is due for a “desired slowdown” and rebalancing of its economy.

High oil prices and weak commodity prices are also seen to continue to impact on global investment and trade.

Read Next
New subdivision to rise in southern Cebu